Of the Church Stretton Circuit 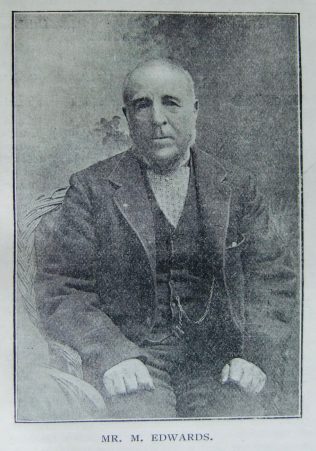 Transcription of Sketch in the Christian Messenger by R. Smith (Cirencester)

The subject of this brief sketch was born in the ancient and beautiful town of Ludlow, in the county of Salop, in the year of our Lord 1829. His mother died when he was only two years old, so that he never knew a mother’s love nor experienced a mother’s care.

His grandfather, Mr. T. Evans, took him and reared him. This Mr. Evans was a Primitive Methodist, and resided at Horderly, in the parish of Wistanstowe, Salop. Mr. Evans had Primitive Methodist meetings in his house, and the lad used to be in the meetings, and after the preaching on Sunday morning the class met, and he tells how the preachers stroked his head, told him to be a good boy, and assured him that some day he would be a preacher, all of which afterwards came to pass. Very early he had to go to work, and mingle with ungodly persons, but the good impressions received in the meetings never left him, but ultimately issued in his conversion to God, and since then have ripened into a mature and beautiful Christian character.

This crisis in his life occurred in his nineteenth year, in a cottage at Leamore Common in the parish of Wistanstowe. The late Rev. R. Bowen, then a local preacher in the Bishop’s Castle Circuit, was the instrument used by God to accomplish that great and blessed work; no wonder he thought highly of him ever after.

In 1851, manifesting signs of usefulness and ability, he was put on the Church Stretton plan, which was then a branch of the Bishop’s Castle Circuit. It is many years since I heard him preach, but I remember he was plain, earnest, original, powerful, and sometimes even eloquent in his efforts. His ministrations were a great blessing to me and many others.

To my personal knowledge he travelled many hundreds of miles, made many sacrifices and suffered many inconveniences in the discharge of his office. He was an expected preacher when he was planned; the people knew he would be there, and they met him and had good times together. No wonder his way opened all over the Circuit and Branch, and I have no doubt many precious souls will be the crown of his rejoicing in the day of the Lord, for his ministrations were much enjoyed and appreciated wherever he went.

It was in the year 1857 that I became more intimately acquainted with him. In the fall of that year l became a member of the little church meeting in his house at Horderley.

For many years the ark of the Lord rested in this house. First in the time of the grandfather, then the widow, and then the grandson, until he was called in the Providence of God to leave the neighbourhood.

For several years I attended the services there and enjoyed the goodness of the class meeting afterwards, sometimes led by Mr. Edwards, sometimes by the preacher for the day, and sometimes by one of the members of the little church. Not only did he open and keep open his house for the preaching of the Gospel, but the entertaining of the preachers chiefly fell upon him, and his means were not at that time by any means abundant, so that he must have made a considerable sacrifice in that particular. But, thank God, in a temporal sense, by his industry and business aptitudes and the blessing of God thereon, he has seen and still sees better days. During the many years the meetings were in that humble cottage many precious souls were saved and trained for spheres of usefulness not only there but elsewhere.

I should be forgetful and ungrateful if I did not add my personal tribute to the worth of Bro. Edwards. Commencing to serve the Lord while yet in my teens, under most unfavourable circumstances, he afforded me great assistance in the shape of good counsel from time to time, not only in the meetings but at other times when I sought his company for the sake of encouragement and spiritual advice.

It is a great source of satisfaction to Bro. Edwards to remember in his house the Gospel was preached to the people who came there for many years. It is a joy to him to name the ministers who preached there, not to mention the local preachers. Such devoted men as W. Chubb, W. Gwilliam, B. Wild, S. Willetts, T. Parr, J. Huff, J. Heath, J. Webster, E. Cooper, W. Jones, and others whose names are in the Book of Life, most of whom have gone to be for ever with the Lord and the few who remain are fast ripening for the gamer of their Father which is in heaven.

The periodical visits of these men did leave a blessing behind. To talk of these men and the happy seasons he has had with them in the Master’s service, and the good they saw done, is really to him and those who hear him a means of grace. On two different occasions he represented his Circuit in the District Meeting with much credit.

He has done much to strengthen the Circuit materially. I believe there are six chapels in the Circuit; for three of them he is a trustee. He helped to raise money to erect them and to put them in easy circumstances. He was steward for his Circuit for nearly thirty years, and only resigned because of bodily infirmity. He always co-operated with the minister, and no minister ever left the Circuit without the salary rule allowed during his time of office.

He and others are now engaged in endeavouring to raise funds for the erection of a minister’s house. This would certainly be a great boon to the Circuit, and it is hoped this effort will be completely and speedily crowned with success.

He has not been without domestic trial. I remember his first wife dying, leaving him with four children all under eight years of age. That was a heavy blow. But the Lord provided him another good wife and mother to his children. Some years ago she passed away from earth to heaven, leaving him a second time a widower. In 1892 he married a Miss Hughes, of Middletown, in the Welshpool Circuit, a godly woman, who is an unspeakable comfort to him in his declining years.

But I must draw to a close, and leave much unsaid which is all known to God.

Owing to being heavy of hearing, he is in a great measure deprived of the means of grace, but he used these helps well while he could, and now he can utilise them no longer he ?nds the Lord wonderfully makes up to him their lack. His confidence in God is unshaken, his hope bright. He is looking forward to the time when he will rejoin those who have gone before, and his nature find perfection, and his love repose.

He has two sons and a daughter. One son is a local preacher, school superintendent and secretary of the Church Stretton Circuit, and the daughter is treading in the footsteps of her father in having Primitive Methodist meetings in her house. Last year I had the great pleasure of spending a few days in his home. His kindness and that of his good wife I shall not soon forget. In every sense it was to me a time of rest and refreshing. To conclude, for many years, amid honour and dishonour, Bro. Edwards has been true and steadfast; he has not been a reed of weakness, but a pillar of strength in his Circuit.

Always consistent, he is universally esteemed by those who know him, and those who know him best love him most. When the Lord takes him he will be greatly missed. May we meet him and other good men and true, whom I may mention had I space, in the same Circuit, in the “Realms of the blest.”

Matthew was baptised on 29 November 1828 at Ludlow, Shropshire. His parents were Matthew and Martha.

Matthew married Sarah Foulkes (abt1821-1887) in the spring of 1861 in the Clun Registration District, Shropshire.

Matthew married Emma Hughes (b abt1843) in early 1892 at Church Stretton, Shropshire.