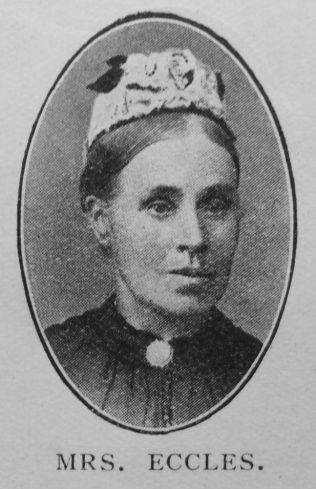 Rachel, wife of Mr. Joseph Eccles, of Tadcaster, and mother of the writer, was born in March, 1840, and died on November 8th, 1909. In early life she was converted among the Wesleyans at Cawood, in Yorkshire. In 1866 she and father, who were then living at Tadcaster, both joined our Church in that place, and for more than forty-three years held a united and consistent membership there. During that long period she rendered much service to her generation. In the home she brought up a family of seven, all of whom are now earnest Primitive Methodists.

From. our earliest recollections we treasure the saintly character and the willing sacrifices of our mother. “Her children rise up and call her blessed.” In the church she was regular and prayerful in her attendance at the means of grace. Her influence was strongly and sanely spiritual. She did considerable good in prayer meetings and revival services, where from time to time she led many to the Lord.

An excellent needlewoman, she assisted in more than forty bazaars, in most of which she was one of the principal stall-holders. Her house was always open to ministers and others who served the Church.

We had hoped to celebrate the Golden Wedding in January, 1910; but for two or three years mother’s strength gradually failed. During the last twelve months she was a great sufferer. Her courage and faith, however, never failed. She rejoiced in Christ her Saviour, and passed away in peace and triumph. We all grieve for the loss of her, yet we are thankful that God spared her to do a life’s work so long, and so consecrated.

Rachel was born in March 1840 at Sherburn in Elmet, Yorkshire, to parents Charles, who worked the land (1841), and Mary.