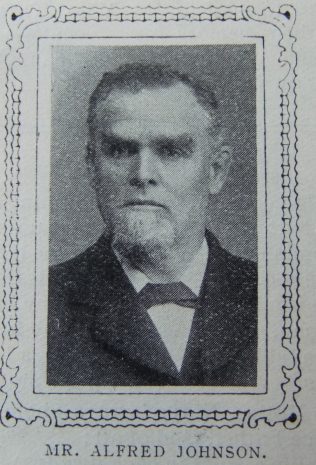 MR. ALFRED JOHNSON, of the Burslem Circuit, was born in 1844, at Whiston. In his early years he attended the P.M. Sunday School, but having to go to work at seven years of age, he associated with ungodly companions, and before he reached manhood was a confirmed drunkard, gambler and poacher. Coming in 1866 to reside at Pittshill, he was persuaded to go to a week-night service at which the late Rev. W.E. Saunders was preaching. Convicted of sin, before leaving the meeting he realised his sins forgiven. Our brother could neither read nor write, and he immediately set himself the task of learning. Three years after his conviction he became a Local Preacher and Class leader. For nearly 40 years he has been a Sunday school superintendent at Pittshill, Hamil Road and Etruria.

At the last named place he still holds that position, and during this long period has not been late three times. He has had much success as a preacher, being in great demand for “specials.” As a Class leader he has been a distinct success, the meeting never drags when he has charge, but is made one of the brightest and most attractive of services. At 66 years of age, Bro. Johnson continues in “full” work. He is now connected with Etruria, taking up the work there a few years ago, at the request of the Quarterly Meeting. Though the church is a considerable distance from his home, when not out preaching he will be found at his post three times every Sunday. He was Vice-Chairman of the Mow Cop Camp Meeting Committee of the recent Centenary Conference, and rendered devoted service in connection therewith. May he long be spared to continue the work he loves so well.

Alfred was baptised on 21 April 1844 at Ipstones, Staffordshire. His parents were Joseph and Ellen (Helen). Joseph was an iron miner.