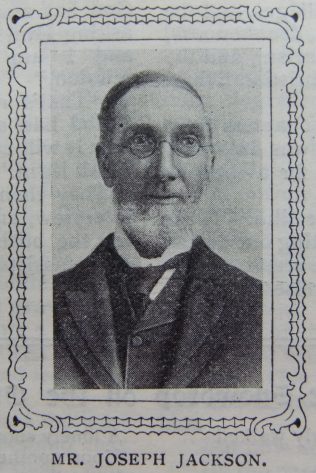 As one enters Talke Chapel, the first thing to arrest attention is a marble tablet: “Sacred to the memory of Richard Jackson, for over forty years a consistent member and earnest worker.” This devoted man lost his life many years ago in a colliery explosion. He has left behind memories of a beautiful life. Of this worthy man, Mr. Joseph Jackson is the worthy son, inheriting all his father’s high and noble qualities. He has a deep spiritual nature. The record of his life is without stain. He is widely esteemed and trusted. His own people love him. His church is in the centre of his heart. It is the ruling affection, the dominating thought. Religion is not a department of his life – it is his all.

Born in 1839, under the shadow of Mow Cop, he soon came into contact with the passionate evangelism of early Primitive Methodism. The lovefeast in which he was converted was marked by tremendous excitement. Strong men were convulsed with sobs, and long estranged brothers clasped each other.

He has lived the whole of his life at Talke. The record of his church work is splendid: Sunday school teacher fifty-three years; class leader thirty-eight years; society steward thirty-two years; junior Circuit steward twenty-nine years. In the twenty-fifth year of this latter office, he received a beautifully framed address from the Quarterly Meeting.

In his office of society steward he finds a very fitting sphere. He is kind and genial. He regards every preacher he meets in the vestry as a warm personal friend, and welcomes him accordingly. While interested in his own village church he has the Connexional spirit and outlook.

He has stood by his church in dark times.