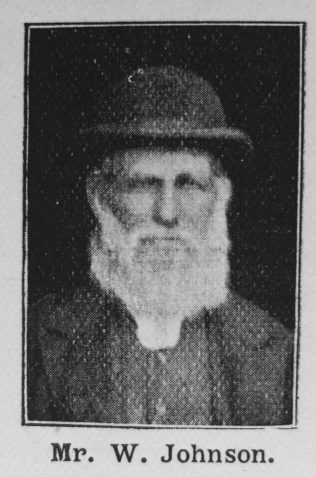 Transcription of Obituary in the Primitive Methodist Magazine by J. Richardson

The subject of this memoir, William Johnson, died at Benton Square in the North Shields Circuit, on the 21st March, 1902, aged 71 years. Upwards of forty years ago, and whilst a comparatively young man, he came to Benton Square; and shortly after his arrival gave his heart to God and associated himself with the society which he served without a break till called higher by his Master.

He followed the line of agriculture whilst in the Midlands, but took to mining here under the owners of the Backworth Coal Company, and whilst engaged as such met with a spinal injury, which permanently disabled him. This was over twenty years ago. Thenceforth he received from the Miners‘ Permanent Relief Fund the allowance due to such cases. Added to this he received from the aforesaid colliery owners “free house and coals.”

The writer knew him years before his accident, and right through his long period of affliction, which was considerably deepened by his wife’s sickness coming about ten years after he received his own accident, and can bear testimony to his sturdy trust in God, which is seen in the words of the old Patriarch Job: “Though he slay me, yet will I trust in him.”

His educational acquirements were meagre, but he had that gift of tactful sympathy which makes a man almost omnipotent with his fellow men.

With what fidelity he stood by Benton Square in its darkest hour! “Give up the old place” never was entertained by him. Well may the Connexion thank God for men of such calibre! men who will not vacate ground, historic in the annals of Primitive Methodism, to be taken over by the enemy. He made up his mind that so long as he could walk to the Chapel, services should be held, and, in particular, the children should have their Sunday School. The Class meeting was a “Bethel” to him. Truly it was here he even excelled himself! What wise counsel he could give to his members! Even the worldling sought his comforting presence In time of sickness; he had “a heart at leisure from itself.”

He officiated as Class-leader for more than 30 years, and, since the death of his dear friend the late Ralph Dawson about 17 years ago, he was Sunday School Superintendent and Society Steward – yea, he stood almost alone, till God in His mercy raised up a band of young men and young women to carry on the work. The sight of this cheered his closing days beyond measure. Oh, how he revelled in holy delight in school anniversaries and camp meetings.

Shortly before death he announced and sang “All Hail the power of Jesus’ Name.”

Let Primitive Methodism produce men like our late brother – men of high moral purpose, faith in God, and sympathy with men, and she shall “say to this mountain, Be thou removed, and it shall be done.”
“Only the actions of the just,
Smell sweet and blossom in the dust.”

Records for William, born abt 1831 and died 1902 are very elusive. I have only been able to identify that he was born in Lincolnshire and his wife was called Ann. They were married before the time of the 1861 census.