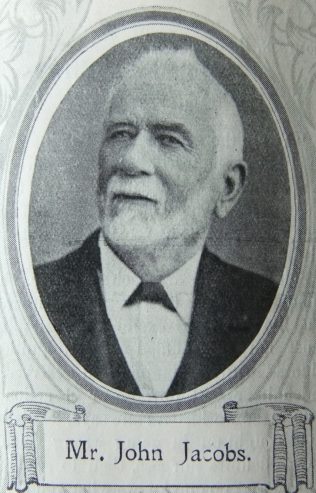 The Chancellor of the Ryde and Ventnor Station has held his office for about a quarter of a century. Converted in 1863, Mr. Jacobs became a member at Ventnor, but on removing some years later, he joined the Sandown Society.

Though possessed of few educational advantages he was early pressed into the ranks of the lay ministry in which he has for forty-three years rendered conspicuous service. Open-air evangelism has ever been particularly dear to him and today, notwithstanding his seventy and odd years, he revels in street preaching and camp meetings.

Ever since the formation of the Missions District, Mr. Jacobs has been a familiar figure at the annual synod, having represented his station some twenty times. On five occasions he has been honoured as a delegate to Conference.

Hale and vigorous, his eye is as yet undimmed and his ardour unabated. May he long be spared to serve the Church he loves so well.

John was born in 1837 at Wroxall, Isle of Wight, to parents Isaac and Amelia. Isaac worked the land.

Census returns proved the following information about his occupations.