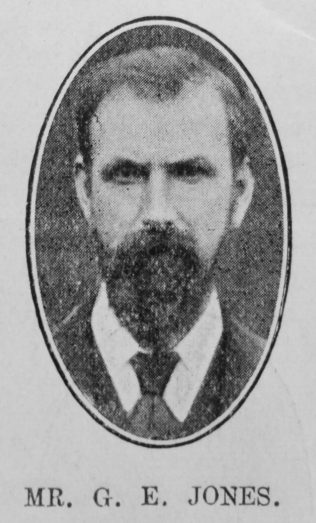 MR. GEORGE E. JONES came to Hyssington when very young. As a youth he attended our services, at one of which he found salvation. Since that day, his name has been linked with the Society in no ordinary manner. Besides being a trustee of the chapel, he was for fourteen years prior to his death superintendent of the Sunday School, a position he filled with great credit and success.

To the Bishop’s Castle Circuit he gave over twenty-five years’ faithful service as a local preacher. A weakness in his voice sometimes caused him to be heard with disadvantage, but his message was always sound and practical, and was ever enforced by his personal loyalty to Christ. Mention may also be made of his interest in missionary work, a practical evidence of which was furnished annually in a well-filled family box, the opening of which was a domestic event of the first rank.

Our friend passed away the day alter his fiftieth birthday, after only a week’s illness. “I shall be better in a few days,” he said, with a smile, to the writer, who saw him on the Sunday before his death. The words were prophetic in a sense other than that in which they were spoken. Late the following evening the doctor was hastily summoned but his presence was powerless to arrest the spirit’s flight. At a memorial service conducted by Alderman W. A. Pugh, in Hyssington Chapel, the presence of a large congregation bore testimony to the esteem in which he was held.

Mr. Jones leaves a widow, and a son and daughter. All three are linked in membership with us, and we have strong hopes that, in the near future, the son may begin to fill his father’s place.

George was born in 1859 at Ratlinghope, Shropshire, to parents Samuel Jones, a blacksmith, and Emma Robinson. He was baptised on 12 May 1859 at Ratlingthorpe.

George also worked as a blacksmith.

He married Martha Elizabeth Davies (b1860) in the summer of 1891 in the Borden Registration District, Montgomeryshire.

George died in 1909 at Hyssington, Montgomeryshire.