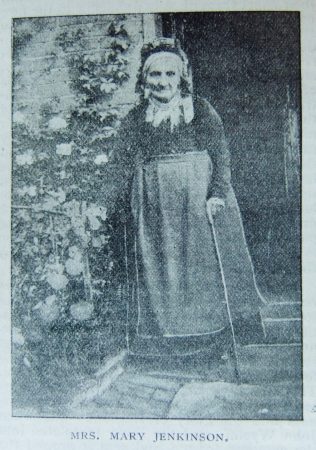 Transcription of Sketch in the Christian Messenger by W.O. (William Overton)

MRS. MARY JENKINSON, the oldest member in the Sleaford Circuit and probably one of the oldest in the Connexion, passed to her eternal reward in May 1899. Her membership dated back to 1829 and from that time to the end, a period of 70 years, she was a faithful and devoted member of our Church.

On December 12th, 1831, Mary Else was married to William Jenkinson, who shortly afterwards became a local preacher, which position he filled for many years.

In the year 1833, experiencing the blessedness of the Christian religion themselves they agreed to pray for the salvation of her mother, Mary Else, and of her husband’s father and mother, and speedily their prayers were answered. They also, with the members of our Fulbeck church (which in those days was the head of what are now three circuits), prayed for a baptism of the Holy Ghost to come upon them, as a Church, and God answered their prayers, and a gracious revival took place, and a large number were saved, many of whom joined our Church. As the old Roll Books in my possession show, Balderton was at this time the head of the Circuit, but shortly after Fulbeck was made the head and continued so for some time.

On removing to Newark about 1841, she and her husband united with our people there, it being a part of the Fulbeck Circuit, the residence of the second preacher. They were brought in close contact with the ministers there, two, at least, of whom lodged with tem, namely S. Bottomley, and the now sainted Saml Antliff. The latter took considerable interest in the education of their only son. Other ministers who have gone home, well known to our sister at various times, were C. Lace and J. T. Neale.

On returning to Fulbeck she was, in 1846, made a Prayer Leader which position she creditably filled for some years. She was also appointed a Class Leader, and well did she attend to the duties of her office, and when members left the neighbourhood she continued to take an interest in their spiritual wellbeing, as the following extracts from a letter will show. They are taken from a letter she wrote to a young woman who had been a member of her class, and who on her removal had gone astray, but who had been led to re-dedicate herself to the Lord. The letter bears date ‘January 31st 1860.’

MY DEAR YOUNG FRIEND.—I was overjoyed with your letter to see that you had again made the Lord your choice, the best of all friends, who sticketh closer than a brother, and is a present help in time of need. Trust in Him, and He will guide thy feet in all the paths of youth. It will save thee from ten thousand snares to mind religion young. I often think of the days when I met my young class, and the glory streamed in torrents upon us; whilst I have been exhorting you to live to God how happy we have been. One of them has gone to glory. I pray the Lord may keep you ever trusting in Him. Tell me in your next if you are privileged to meet in class; if you are, do not neglect to do so. I love communion with the Saints. . . . I feel my heart tenderly tied to the members of my class, and I want to meet them all in glory. I love your soul and I want you to press on.
Your well wisher and friend, M. JENKINSON.

After her husband’s death, which occurred in 1869, she continued to take great interest in our Fulbeck Church, and to do whatever she could to promote its wellbeing. Thus she continued to the end. She was respected and revered by all who knew her. The worst characters in the neighbourhood were impressed by her saintly character, and devotedness to God. The writer only knew her during the last few months of her life, during which time she was constantly confined to her home, but to know her at all was to know one of God’s noblest saints. At the ripe age of 89 she delighted to converse upon spiritual things, and her quiet trust and implicit confidence in God were a joy and beauty to behold. To see her face was as seeing the face of an angel. I always left her cottage immeasurably helped and strengthened for my work. When the end of her course here came all was peace. She had no death struggles; she conversed with her only son and his wife who had kept her in comfort for years to the end. Some of her last words were ‘Yea, though I walk through the valley of the shadow of death, I will fear no evil for thou art with me; Thy rod and Thy staff they comfort me.’ With a smile on her countenance she passed peacefully away to the presence of the Lord.

Mary was born abt 1810 at Coddington, Nottinghamshire.

She married William Jenkinson (1811-1868) on 12 December 1831 at Fulbeck, Lincolnshire. William worked as an agricultural labourer and Mary supplemented the family income as a dressmaker. Census returns identify one child.