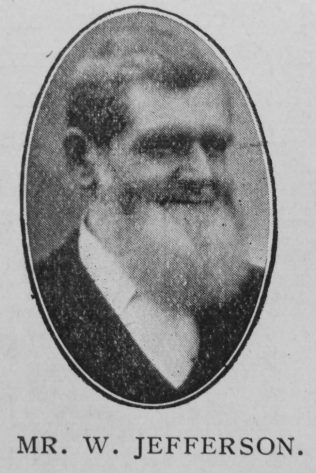 Transcription of obituary published in the Primitive Methodist Magazine by A.W.

By the sudden decease of Mr. W. Jefferson, Higher Ardwick Church has lost a loyal servant who sustained the lowly but responsible office of caretaker with unstinted devotion for sixteen years. Born in Yorkshire sixty-five years ago, he removed to Higher Ardwick in 1896. Here, by his genial temper, affable demeanour, and efficient service, he commanded the confidence and affection of the church. By his “annual efforts” he raised over £100 for the Trust funds.

Of a quiet and retiring disposition, yet he was astute as a diplomat and handled delicate tasks with astonishing success. Generous to a fault, some of the unemployed tell how, in a time of distress, he kept them in food for a whole month. He won charity from others, too, and begged in twelve winters over £75 for the annual children’s free breakfasts and old folks’ free teas. All his life associated with Primitive Methodism, he was for more than twenty years an active member. The affection in which he was held found expression at the funeral service, conducted by the Circuit ministers. The Rev. A. Wilkes conducted a largely attended memorial service on July 7th.

He married Mary Ann Shanks (1851-??) in the spring of 1874 in the Rochdale Registration District, Lancashire.  Census returns identify two of three children.