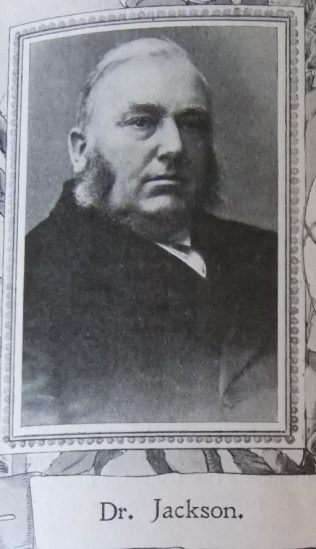 The circuit steward of Caledonian Road, London, is the son of Rev. Thomas Jackson who with Thomas Russell and G Wallace missioned Reading, and was a pioneer in founding Brinkworth District; his mother was also an eloquent preacher. Dr. Jackson commenced practice in Barnsbury, London, thirty-two years ago, and by his skill and attention has made an extensive practice. He was appointed to his present position as circuit steward sixteen years ago; and, said sainted mother, “I am prouder of my son’s appointment as circuit steward than of his success as a medical man.” With his high character, his genial disposition, his fine loyalty to our Church, his great liberality and his regular attendance at the means of grace, he is an ideal circuit steward. He has served lengthy terms as a Vestryman and Guardian of the Poor. As Chapel treasurer he also renders valuable service.

James was born in 1842 at Allington, Wiltshire, to parents Thomas Jackson and Emma Young. Thomas was a PM Minister.

He married Martha Eustace (1855-1925) in the spring of 1879 in the Islington Registration District. Census returns identify four children.