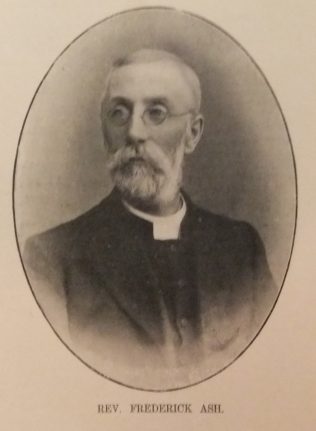 Frederick was born in 1849 at Waterhouses, Staffordshire to parents William and Mary. William was a police officer.

Frederick was converted in Buslem in 1866 through the ministry of his Sunday School Superintendent, Thomas Mottram. Twenty months later he was placed on the Tunstall plan as an exhorter, and in the following year recommended for the ministry.

Frederick had a strong, lithe form, a presence in the pulpit. His voice kept company with his wiry physique, and could endure a prolonged strain, a voice that was always easily equal to the largest sanctuaries and very pleasant to hear, while in open-air work he was ever at his best. First and foremost, Frederick was a Methodist Evangelist. He ever sought for fruit and had the joy of witnessing large and continuous revivals.

His obituary records that he was tactful in dealing with men, careful in administration, and diligent in pastoral work; a faithful preacher, loyal colleague, and true friend.

Frederick married Edith Sarah Archer, nee Delf (b1862) in the summer of 1904 at Rotherham, Yorkshire.