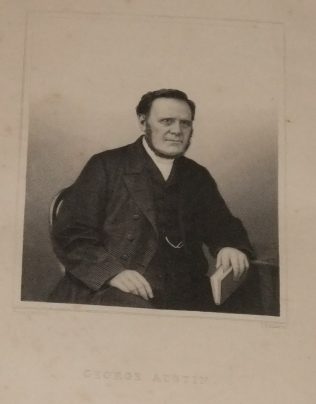 George was born on 13 January 1810 at Kingsley, Staffordshire. Kingsley was known as a meeting place for all the ‘roughs’ in the Potteries. As a child he moved to Brailsford, Derbyshire. Curiosity led him to hear Mrs Parsons preach. It was a turning point. George was convicted of his sin, felt a deep sense of guilt and suffered intense mental agony. Such was his state of being that a doctor pronounced him mad and tried to send him to an asylum. He soon recovered and joined the class of Mr Brownson (grandfather to Rev W J Brownson). Domestic circumstances led him back to Kingsley where he helped to raise a society. He became a local preacher.

In 1836, George was appointed a lay delegate to the Tunstall District meeting and shortly afterward became a lay delegate at Conference. He was urged by Hugh Bourne to enter the ministry and went to Leek, where he had previously help in a mission.

George in his ministry aided the erection or purchase of 49 Chapels, schools and houses. The total increase on his stations was 2258 in 41 years.

George was baptised on 14 January 1810 at Kingsley, Staffordshire.

George died in 1887 in Luton, Bedfordshire.