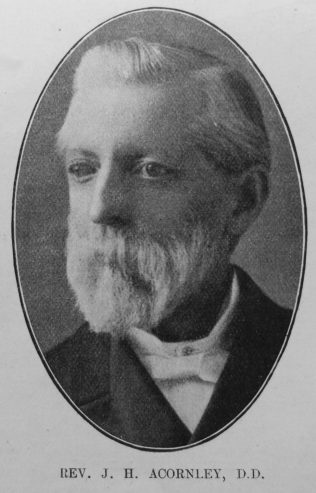 Primitive Methodism in the United States has lost one of its most widely known and highly respected ministers by the death of Dr. John Holmes Acornley. He had filled the highest offices in the gift of the Connexion with dignity and ability. Secretary and afterwards President of the Pennsylvania Conference; President of the Eastern Conference in 1893, and General Secretary in 1899, a position to which he has been regularly elected every year since, he was also the Book Agent of the Eastern Conference, Treasurer of the Preachers’ Benevolent Association of the Eastern and Pennsylvania Conferences, and thrice elected editor of the Connexional organ, “The Primitive Methodist Journal.” In addition to these heavy responsibilities he had just completed the “History of Primitive Methodism in the United States.” It will be seen, therefore, that Dr. Acornley filled a large place in the life and activities of American Primitive Methodism, which though separate and distinct from British Primitive Methodism cherishes a warm regard for the latter and regularly contributes to its Missionary Funds,

Born at Burnley, Lancashire, England, December 28th, 1842, he was promoted to the higher service September 16th, 1907. His father and mother were Primitive Methodists, the former before marriage being a short time in the ministry, and the first to mission the town of Hinckley, Nottingham District.

On his marriage he retired from the ministry and engaged in mercantile life in Burnley. John was the third son, and owing to the financial difficulties of the family had to be early sent to work, and thus enjoyed few educational advantages.

He was brought up in our Church and Sunday School, and when nineteen years of age was converted at Rochdale under the ministry of the Rev. W. Inman. He soon became a teacher, exhorter, and local preacher, and his services were early in demand. In 1868 he married Miss Agnes R. Whillock, daughter of Rev. Benjamin Whillock, and two years later emigrated to the United States. He entered into business with his uncle with every prospect of success, but his heart was set on the ministry, and in response to an urgent call he entered the work of the itinerancy. That work involved long journeys and many privations and hardships. In his third circuit, Morris Run, he lost his wife, and this crushing sorrow necessitated a period of rest. He visited his English home with his two motherless boys, whom he left temporarily in the care of their grandmother. Returning he published a little volume, “Sunshine among the Mountains, or the Young Pastor’s Wife.”

When stationed at St. Clair his widowed mother joined him and cared for his home and children. On his return to Morris Run his mother died suddenly, and he buried her beside his young wife. All these sad experiences were crowded into the first few years of his ministerial life, but with patience, fortitude, submission, and heroic courage he endured his bitter trials. Thirty years ago he was happily united in marriage at Pottsville with Mary L. Sterner, who has been a good mother to his children and a true and faithful wife.

Ten years ago Dr. Acornley was compelled by failing health to retire from the active work, and has since lived at New Bedford; but these years have been among the busiest of his life. As already indicated, in varied spheres he has served the Connexion, which in return has lavished upon him every honour in its gift. In recognition of his ability and culture the West Maryland College conferred upon him the degree of D.D.

As a preacher and lecturer he was forceful and acceptable, and on special occasions might always be relied on to come up to the expectations of the hour. His sermons were marked by clearness, commonsense, pertinent illustration, forceful delivery with occasional touches of pathos and wit, and attended by a gracious unction. Behind his ministry was that sterling character which is the secret of the highest success. He was an able and successful administrator and a Christian of the highest type. Though gifted with neither a strong physique nor a commanding presence he was one of nature’s noblemen. Faithful to Christ and loyal to the Church he laid on her altar his best gifts and the most unselfish and unstinted service. His Christian character, strengthened and: beautified by sixty-five years of toil and discipline in the strife of life, loomed up grandly in his final moments.

He wished to live for the sake of those he loved and for Christ whom he loved best of all, but cheerfully submitted to the will of the Heavenly Father. His loss will be deeply and widely felt throughout the Church he loved so well and has so faithfully served.

John was born on 28 December 1842 at Burnley, Lancashire, to parents Richard Acornley , a PM minister, and Ann Holmes.

The 1861 census return records his occupation as cotton piecer.