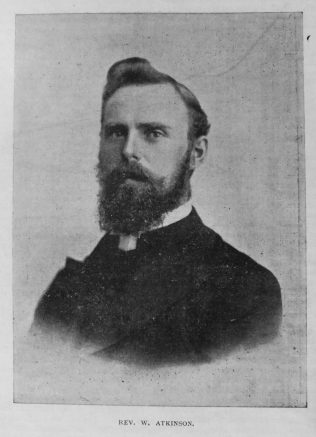 Transcription of Sketch in the Primitive Methodist Magazine by Charles Humble

PRIMITIVE Methodism suffered one of her greatest losses in the death of the Rev. John Atkinson. Without him our ministry is seriously impoverished. Though the familiar name of Atkinson is no longer in the Home Primitive Methodist ministry, it is well and honourably represented in the Australian ministry.

The Rev. William Atkinson, whose photograph is herewith reproduced, is the son of the late Rev. John Atkinson, and is for the year 1900-1901 the President of our New South Wales Conference.

The writer first met with William Atkinson in the North Shields Circuit, and since then has enjoyed and profited by a most precious friendship with him. Together we there came under the ministry and personal care of the late Rev. Hugh Gilmore.

William Atkinson was then fifteen years of age, and a draper’s apprentice. When he was but sixteen years of age his name appeared on the plan as local preacher. From the first he was a young man of recognised power and promise. His preaching then, as ever since, was strongly argumentative. Like his honoured father, his greatest strength lay in his power of debate. This much was well known in the Mutual Improvement Classes at North Shields and Percy Main. The writer also remembers how that on one occasion, a University Unitarian lecturer visited North Shields, and at the close of his lecture the meeting was thrown open for questions. Young Atkinson, (seventeen years of age), rose to his feet, began and pursued the debate until the lecturer was hissed from the platform. At the close of his apprenticeship he removed to Gateshead, and very shortly afterwards to Newcastle; there he joined the Nelson Street Church. At North Shields and Newcastle several fruitless attempts were made to get him to come forward as a candidate for the ministry. All, save himself, were fully convinced of his special fitness and qualifications for the office His doubts and scruples were not overcome until he was nearly twenty-one years of age. In that early struggle Rev. Wm. Bowe, who was superintendent of Nelson Street Circuit, was a true and helpful friend to him. In a recent letter to the writer, he says:— “It was Mr. Bowe who taught me to read a book, and take the heart of its teaching out of it.”

After serving six months as hired local preacher with Mr. Bowe, and doing successful evangelistic work at Nelson Street, and other places in the circuit, he sat for the Candidates’ Examination, when he and Mr J.G. Bowran, (“Ramsay Guthrie,”) came out at the top of the list with an equal number of marks. Mr. Atkinson was stationed in the same year from the Reserve List, as superintendent of the Morecambe Branch in the Lancaster Circuit. There he did twelve months of hard but successful work along with the late Rev. J. Laverick. Considerations of health compelled him to seek another climate, and the second year of his ministry was begun in New South Wales. This separation was a sad grief to him, his parents, and family, but was borne with the conviction that it was for the best. It is nearly twelve years since he went to Australia. There, amidst many difficulties, he has done splendid and valuable service, and at the New South Wales Conference of 1900 this was recognised by his appointment as President. For the purpose of this article we cannot do better than quote the following from the “New South Wales Primitive Methodist.”

“His pronounced character makes him a man who must be known. He carries with him no little emphasis, and must always be reckoned with in any position he may occupy. Comparatively young, he has profited well by his studies and varied experiences, and stands well forward in the ranks. In the pulpit he is a strong man. Intelligent and thoughtful, his utterances are always worth the hearing. On the whole, he is liberal in opinion, and has endeavoured to maintain acquaintance with the best thought of the age. He is, if anything, too deliberate in style. His oratory does not consist in any rapid flow of speech, but in rich thought couched in suitably good language. His reasoning powers are of a high order, and in his sermons and addresses, method counts for much. He has done good work as a circuit minister, though his strong will has occasionally caused him a little inconvenience. He commands the respect of our people on stations which he has superintended or visited, and his election to the Chair will be popular throughout the District.

“In business meetings he is always a prominent figure. Like his now sainted father, he is strong in debating power, and does not forget to use it. It has been suggested that the Conference of 1900 conserved time by placing him in the Chair. A man who can speak 140 times in three days’ sittings is no mean member of Conference, especially when it must be admitted that his contributions to a discussion are of considerable value. He knows all the tricks of logic, can beg the question with anyone, and so emphasise a side-issue that there is danger of many losing sight, of the main point. He is a good fighter, but withal friendly when he fights.

“In the Chair of the Conference he acquitted himself creditably. We have no doubt his year of office will prove him to be the man for the place. In matters outside our own Church he will do himself and his people credit.”

It may thus be gleaned from the above extract that the bright promise of his early youth is being rapidly fulfilled. Warm congratulations are offered and great hopes entertained by a large circle of friends in this country toward our friend, in his far-away new home. He is now thirty-four years of age, and if good health is continued to him, a great career is before him.

The yearning of his heart has long and often been to come back to see his loved ones. Hither-to this has been impossible, and much as he would love to return to the home ministry, yet he dare not. His health in Australia is good, but he fears the English Climate.

His only remaining sister and his father have passed from earth to heaven since he went to Australia; the aged and lonely mother remains. To see her again in the flesh is yet his great desire. Much and earnestly we hope this good desire may be granted to them. Next to the love of his family, we venture to say, stands his love for Primitive Methodism, and yet the union of the Australian Methodist Churches makes his separation from us inevitable.

William trained as a draper before entering the ministry.

W. Leary, Directory of Primitive Methodist Ministers and their Circuits, 1990