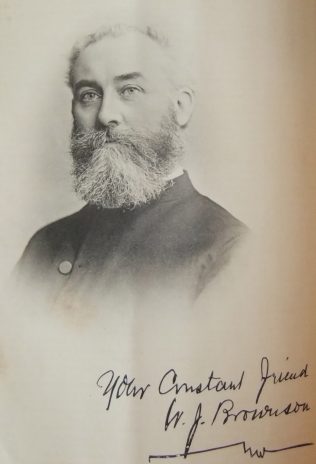 William was born on 30 September 1839 at Nottingham. His father John was a PM Minister.

William gave himself to Christ in November 1850 at Hockley Chapel, Nottingham. He became a local preacher in September 1857. Immediately before entering the ministry William supplied for Rev John Woodcock in Nottingham.

William undertook a good share of chapel building and enlargement. He was able to use his own skills as a draughtsman to draw up plans and specifications.

The matter of his preaching was mainly doctrinal and ethical, but was ever the old truth, made fresh and attractive by a new setting.

At Scalford, in the Melton Mowbray circuit, William’s father preached the school anniversary sermon for 25 consecutive years. When he died William stepped in and preached the anniversary for 32 years without a break.

William married Eleanor Lace (1837-1889) in the spring of 1867 at Derby. Elizabeth was the daughter of Charles Lace. Census returns identify four children.