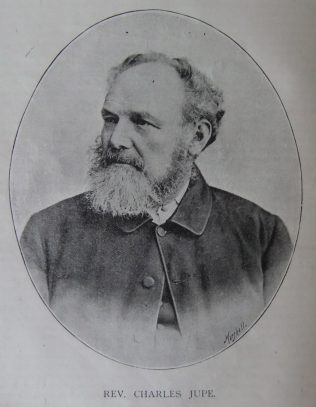 Charles was born in 1836 at Marks Corner, Northwood, Isle of Wight to parents Jacob Jupe and Celia Casford. Jacob was an agricultural labourer.

Charles attended a small Congregational Sunday School as a child. Although he experienced religious feelings when young they were not nurtured and the neglected child grew into a wayward youth.

About 1850 the Congregational Chapel passed to the Primitive Methodists. Celia became a keen worker in the PM Society at Northwood. When aged 20, Charles was stricken with fever. This gave him time for thought, which led to his conversion in February 1857. In July 1857 the society at Northwood had a fervid and startling evangelist appointed (E. C. Pritchard). He heavily influenced Charles to join in the ‘soul-saving’ business. In September 1857 Charles went on the plan.

Whilst at South Molton, more than 100 persons professed conversion, a new chapel was erected and paid for.

At Plymouth, Charles reported an increase of 170 members.

His obituary records that Charles was on his throne when in the pulpit. He put into his sermons his very best. He was always evangelical in his preaching. Christ and Him crucified was the theme that charmed him and entranced his hearers.

Charles had a very good constitution, which in his early ministry stood him in good stead. He loved the open-air service and the prayer meeting with its fire and power.