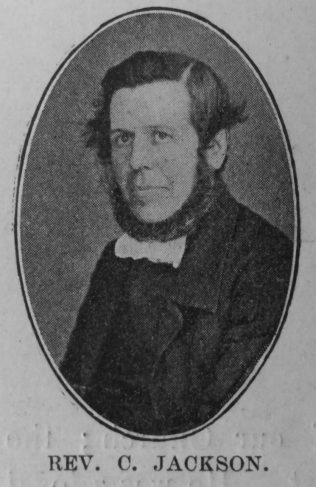 A transcription of obituary published in the Primitive Methodist Magazine by Thomas Jobling is attached. Jobling quotes as follows from a letter sent by the Rev. Thomas Hindley, “I have consulted a number of the officials of this station relative to the labours of the late Rev. C. Jackson, while in this circuit, and the unanimous testimony of all of whom inquiry has been made, is, that he was ‘in labours more abundant;’ in the pulpit he was efficient and acceptable; in his official transactions he was firm but courteous, he was a steady maintainer of Connexional discipline; in his social and pastoral intercourse he was very agreeable, and by his kind Christian deportment he was made very useful in this department of Christian labour. Here he was very much respected, and his name is as ointment poured forth.”

Charles was born on 8 September 1819 at Statham, nr Lymm, Cheshire, to parents Peter Jackson and Eleanor Goulden. His brother, James, was also a PM minister.

After superannuating due to ill health Charles bought a small farm at Kirk Michael.