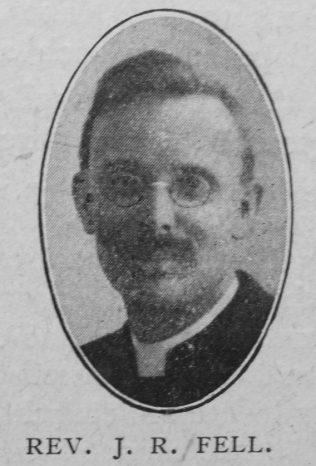 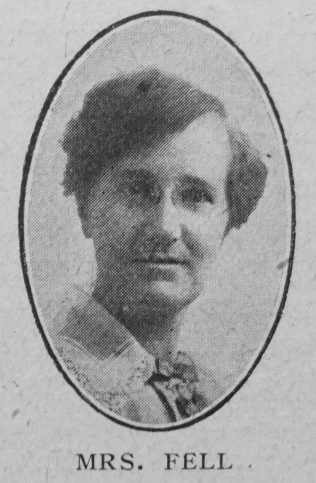 JOHN ROBERT FELL: born at Pontefract in 1879. The twin influences of his church and a godly home soon bore fruit in his life, for while still a boy, he recognized and acknowledged the call to serve Christ on the mission field. This, in itself, was an indication of the qualities of determination, single-mindedness, and integrity which were to characterise the man in an outstanding life of service. For a few years he gave himself to teaching for the one purpose of equipping himself for the work upon which he had set his heart. Accepted for the Primitive Methodist Ministry, he entered Hartley College, and after training, commenced, in 1903, short ministerial terms in the Home work, first in Belfast and then in Abergavenny.

In 1907 his Church called him to pioneer work in the Zambesi Valley of N. Rhodesia. It had matched the man to the work, and a long and distinguished career of Christian service in the heart of Africa had begun. First at Kanchindu, and then at Kafue, he blazed the trail of Methodist Missionary work. With the passion of his faith and his intensity of purpose, he flung himself into the task, clearing the forests for his mission stations, making his own bricks and his own furniture, building mission houses, schools, and churches from ground-level. At Kafue he founded the Native Training School for Teachers and was its first Principal. He reduced the Batonga people’s tongue to a written language, wrote two Tonga ‘Primers’ and a Tonga Grammar, and then, working for the British and Foreign Bible Society, translated parts of the Scriptures for the people’s use. To add to the enrichment of their worship and faith, he edited and translated a hymn book of their own.

Besides his evangelistic work, he toiled untiringly for the social and educational advancement of the natives’ life. He encouraged and trained them in new methods of agriculture, and began new arts and crafts among them. To this end he wrote several textbooks on agricultural and cognate subjects, which have proved of great value to native life in N. Rhodesia. His service to the people was recognised by his appointment to the Government Advisory Council for native education, and further acknowledged when, in 1927, he was invited by the Government to become the first Principal of the new Jeane’s School for the Training of Native Teachers, at Mazabuka.

But whether it was his work as evangelist, teacher, or administrator, it was but an expression of that early resolve to serve Christ, the compulsion of which he never resisted, and the enthusiasm of which he ever maintained. God had called him to be one of the Kingdom’s modern frontiersmen, and had given him the qualities for that exposed position—courage, inflexible determination, grasp of detail, and resourcefulness, and yet with it all, a shy humility which hid from even his close friends the romance of his achievements.

Through all these manifold labours he had the devoted loyalty and help of his wife. In his retirement, spent mostly in Salcombe, South Devon, though one felt that, like Livingstone, in whose tracks he partly followed, his heart was in Africa still, yet the same gifts which had served that land and people, asserted themselves, and his spirit found no rest except in service, both in Methodist and Free Church affairs. The consecration of the boy, through all those tumultuous years, had never faltered. He died very suddenly on 30th October 1947, a good soldier of Christ, the like of whom it is always the Church’s genius to produce and her privilege to remember.

John was born on 18 January 1879 at Pontefract, Yorkshire, to parents John William Fell, a cabinet maker, and Eliza Heald.