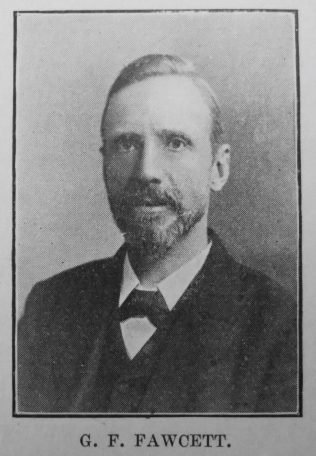 GEORGE F. FAWCETT: born at Brompton, near Northallerton, November 12, 1850. During boyhood he gave striking evidence of his deeply religious nature. He had a passion for beauty, and was always happy in the fields and woods. After training at Sunderland under Dr. Antliff, he began his ministry in 1875. He proved himself “a friend and aider of those who would live in the spirit.” His term in Harrogate was crowned by the erection of the handsome and commodious Dragon Parade Church. He was appointed Governor of Elmfield College, York, in 1904, and many of the old boys thank God on every remembrance of him. His high-toned character was an incarnation and exposition of his teaching.

During the years of his retirement in Scalby, near Scarborough, his radiant personality was an inspiration to the preachers and worshippers in that village community. He died in peace on November 3, 1934, having enriched and ennobled life for many because he passed their way.

George was born on 12 November 1850 at Brompton, Yorkshire.