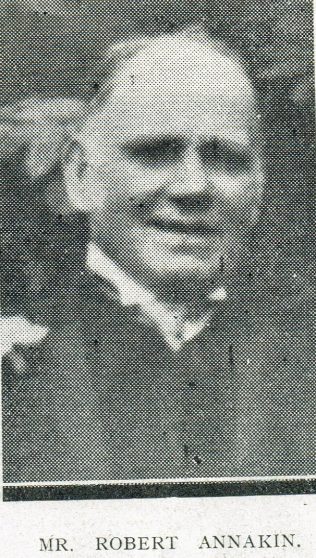 Robert Annakin was one of 14 children of Robert and Hannah Annakin.  He played a leading role in the development of the Primitive Methodist church in Harrogate.

After only a few days illness, following an accident, Mr Robert Annakin was called home to God. He was in his 74th year. On the Friday before he had been at the Men’s Fireside and at Church on the Sunday morning. It is hard to realise that he has gone.  He was one of the stalwarts of Primitive Methodism in Harrogate and in all the surrounding district. Between fifty and sixty years ago, his mother, a widow came with her family of five sons and nine daughters to Harrogate. They came from Whixley where the Primitive Methodist chapel had been the centre of their life. Coming to Harrogate they immediately joined the Primitive Methodist cause there. From that day to this the family has been absorbed in our Church. Some of the members of this family have come to fame in the life of the town and nation.

Robert Annakin, though sharing in the family characteristics, had a personality of his own. There was individuality in him. He was frank and fearless and independent. Everyone knew that he was a man of God.  He knew God in the secret places of his heart. He was a man redeemed through the grace of God in Christ. He made no secret of his friendship with God. He could talk in the most natural way of things divine. They were his real life. There was nothing static in his experience. It was ever growing. That was why he loved the House of God and the means of Grace. Only illness kept him away. For fifty five years he was a local preacher and in the days of his strength he was a preacher of remarkable originality and power. Stories are told in Harrogate and district of his many exploits and quaint sayings.  He preached also in his daily life. He was great on ‘conversation preaching’. Scores of people must have heard his testimony to the saving grace of God. He was a great lover of children and so the Sunday school was his natural place. He had the child’s heart. The children in our Orphan Homes were dear to his heart. He was a great encourager.  Words of praise and thanks came easily to his lips. He was appreciative of all sincere effort and a fervent believer in the future of the Church. His was the forward look and the hopeful heart. He had many sorrows and trials and bereavements but they were all transmuted into faith and hope and love. His courage was very evident. Many would have regarded his physical disabilities as a cause for retreat.  He never knew defeat and persevered to the end. He served our church in many capacities and with great faithfulness. He has gone home to God but he will never be forgotten by all who knew him. With his widow, her sister, his own brother and sister, his sons and all the members of his family much sympathy has been expressed. He was laid to rest in Grove Road Cemetery, Harrogate, on Saturday, February 20th, 1932, after a service held in the Dragon Parade Church in which the Revs J E Leuty and J G Bowran took part.