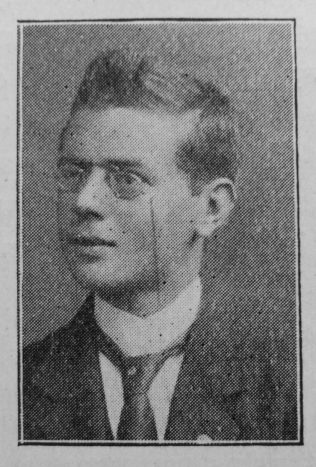 Transcription of Obituary in the Primitive Methodist Magazine by E Campbell

The Sunderland Third Circuit in general, and the Southwick society in particular, suffered a great loss in the death of R.S. Allard, son of Robert and Josephine Allard. He was a young man full of promise, and favourably impressed all who came under his ministry. Soon after his conversion he became a diligent worker in the Sunday School. As a school visitor he gave evidence of having more than ordinary ability, and was recommended for the local preachers’ plan. He soon gained the confidence and esteem of his fellow local preachers, and proved himself to be an acceptable and successful preacher of the word of life. He was gifted with a natural ability of a high order. His zeal and originality soon gained the ear of his congregation. The December Quarterly Meeting recommended him as a suitable candidate for our ministry. He accepted the call of the church in all lowliness and humility, and gave himself to diligent preparation. He passed the oral examination at the Leeds centre, and was in the midst of his written examination at the District Meeting held at Cullercoats in the North Shields Station when he broke down in health. He had preached his trial sermon and had had a very good service. Proceeding from the chapel to the house of a friend he was seized with an attack of bleeding from the lungs. The doctor pronounced it a rapid decline, a decision which took all his friends by surprise. He looked a strong, robust young man, full of health and vigour. He was removed to his own home at Southwick during the District Meeting session, and gradually got weaker and weaker.

A few days before his death the writer received a letter from Mr. Welford, the secretary of the Candidates’ Examination Committee, stating that Mr. R.S. Allard was one of the successful candidates. When I told him the news he quietly said, “As God wills.”

We planned a bright and hopeful future, God willed a speedy translation. We built our hopes on what we saw: God said, Come up higher. His probation had ended on earth, and he joined the higher ministry of Heaven. We have seldom seen a life prophetic of good cut down so suddenly. His days of declining health were days of patient waiting for his Lord. All his thoughts were of and for others. He was a son who was a credit and an honour to any home. In the agony of suffering he suppressed his feeling lest he should give pain to his mother. His last days were worthy, as an expression of Christian faith and patience, of a place of distinction among the noble army of saints departed. He sent a message on the day of his death to his Sunday School scholars to come and say good-bye to him. His last words were a psalm of thanksgiving to God, who had by grace enabled him to do a little service to the glory of his Master. Gathered round his bed they said not farewell, but good-night, till they meet again in the morning light.

On May 29th, 1904, he entered into rest. The ministerial candidates of the district were present at the memorial service held in Clockwell Street Chapel,  and they along with the societies in the circuit and many friends sent floral tributes to his memory. We renewed our covenant of service at his graveside, and prayed that after a little time we with him might be “For ever with the Lord.”

Robert was born in late 1883 at North Shields to parents Robert, a general cartman (1901), and Josephine.

The 1901 census describes Robert as an agricultural labourer.