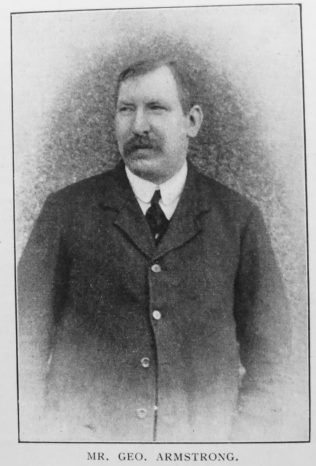 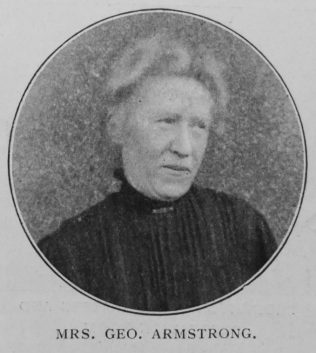 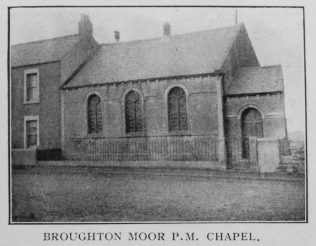 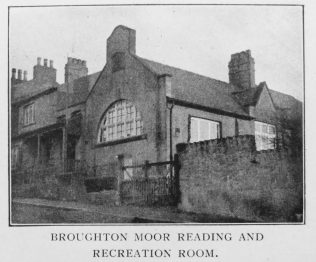 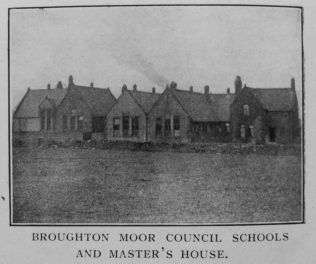 DISTINCTIVELY Primitive Methodist influences have co-operated to make the man whose name is written above one of our stalwarts. By good fortune he sprang from pious parents, both of whom were devoted members of our Church. Joseph Armstrong, his father, was a life-long Sunday School teacher, and was keenly interested in the prosperity of our Zion. Sarah Armstrong, his mother, warmly seconded all her husband’s endeavours. She retained her seat in the choir long after marriage, and was a most zealous supporter of all our enterprises. “George” was born at  Cockermouth—the town of the poet Wordsworth. His recollections of early days are all tenderly associated with three or four of our little sanctuaries in Cumberland and with their soul-stirring services. At one period of his childhood meetings were held in his father’s kitchen, and a revival emanated therefrom that refreshed the neighbourhood for many miles around. The palimpsest of his memory carries the happiest remembrances of class meetings, of prayer meetings, and of preaching services held at Cockermouth and other contiguous places. So lasting are the impressions of the boy in the after-life of the man.

Then our stalwart owes a good deal to our ministers—past and present. He can speak affectionately of the Revs. W. Saul, J. Moffat, W. Johnson, M.P. Davison, J.G. Bowran, C. Humble, J. Hawkins, C.C. Goodall, J. Forster, J. Burton, and others. Our genial friend, the Rev. M.P. Davison, once fastened a nail in a sure place in George Armstrong’s life. Returning from a Circuit picnic held in the old Castle grounds at Egremont, Mr. Davison pressingly invited all the youths who had accompanied him to attend the weekly class meeting. A number of them accepted the invitation, and these are all to-day linked in Christian service in our own or other religious communities. In this way George Armstrong was switched on to the grand trunk line of our Church’s activities. He immediately became a member of society, and commenced to play a part in the Sunday night prayer meetings and stepped into that triumphant procession that marches down the ages.

The good thus imparted to our brother in days of his fervent youth has flowed back again to our Church in the solid work of his manhood. For over thirty years he has been in labours more abundant. No man throughout the denomination can have more irons in the fire— none can keep them hotter. He was endowed at the start with a sturdy frame and abounding physical vigour. Nature also blessed him with a fine mind. It has been well cultivated, is perfectly disciplined, and kept in readiness for the tasks of life. Mr. Armstrong has bent all his strength to serve the Connexion beloved of his father and mother. He has stedfastly remained a worker among the young people of our Church. He has been a school superintendent for two decades. He has organised school anniversaries and trained little children for the same for a quarter of a century. He has actively participated in the work of Circuit Sunday School Unions. He has contributed to the success of our ‘Triennial Conferences—reading a paper at Oldham in 1907 on “The Bible sing the School.” He has been a Band of Hope worker for twenty-eight years and, besides rendering valuable local service, has been President of the Maryport and District Band of Hope Union, and a member of the Cumberland Executive—a temperance league of immense force in the North of England.

At twenty years of age he became a Local Preacher, and in this branch of service he has made a space for himself in our pulpits in West Cumberland as well as in other Free Churches. He is a Class Leader, President of the Christian Endeavour, Steward of the Cockermouth Circuit. His energies have overflowed into the District and he has been a member of the Carlisle and Whitehaven Committee for nearly a quarter of a century. Of three important committees he is treasurer, to wit, those controlling the School, the C.E., and the temperance departments. He is frequently appointed Chairman of the various committees, and is able to guide the current of debate. He has a good grasp of Connexional law and usage. He has been a delegate to District Meetings; to Conference also and always with credit. He shirks no labour if thereby he can extend his usefulness. He has indeed a brow for every good cause.

Now, mirabile dictu, the present “stalwart’’ is by profession a schoolmaster. Perhaps one may be permitted to say that no man’s loyalty to Primitive Methodism can be more severely tested than a schoolmaster’s. Dominie Armstrong has kept his armour bright. More than once or twice in his daily avocation he has sacrifices for his Nonconformity. He has cheerfully made them and gone on the shining way. As a pupil teacher and assistant master he served in two or three board schools. For nearly thirty years he has been Headmaster of the Broughton Moor County Council School. Throughout his professional career he has been a member of the National Union of Teachers, and has acted respectively as secretary, vice-president, and president of its local and county asociations. He is most deeply interested in the education question, and labours, in season and out of season, to secure a truly national system of education for the nation.

Hence it may go almost without saying that Mr. Armstrong is an ardent politician. He has adhered to the Liberal side through many vicissitudes, and rendered excellent service thereto. His life has been all of a piece. He has never doubled on the track. He is—ever has been—an unreienting Radical. He was a warm admirer of the late Sir Wilfrid Lawson and he abides under the flag of the present bearer of that honoured name. At election times he is much in demand as a speaker. He can put his case persuasively and convincingly. When he has done speaking the people who arrived in darkness have seen a great light.

In local politics he has always been in the forefront of the battle. Years ago he took a leading part in a tremendous struggle for the formation of the Broughton Moor Parish Council and was elected its first chairman. He is still on this Council. Then he is deeply interested in the Co-operative Movement. He finds time to be secretary of the Men’s Institute of the village, and is keen on the intellectual development of the community.

In the whole round of the affairs of life George Armstrong is an intensely practical man. He loves to track the reasons of things. He goes down to the roots of questions. He may appear nonchalant, but let no mistake be made; he is indeed a very quick observer. Behind the bushy eyebrows the brain is ever busy. He can polish the subject of his thoughts as a stone is polished on the wheel of the lapidary. In the rough-and-tumble of life he has given attention to reading, and has, profited much thereby. His favourite authors are the masters of our mighty English tongue, namely, Scott, Dickens, Shakespeare, Milton, and Ruskin. In his, personality is united a liberal breadth of culture to an intensity of religious fervour. He is a level-headed speaker—clear, forcible and winning. He dares to stand alone with the right. He can arouse the conscience. His preaching gets home to the daily interests of his hearers. He attempts no flights oratorical. He possesses supremely the gift of teaching, and is apt at illustration. He practises the invaluable art of the varied repetition of the

truth. He is less concerned with the beauties of composition than to get the subject well understood of the hearers. He is a barrister —putting points to gain a verdict. He is not sicklied o’er with the pale cast of thought. He is a merry saint – rotund, and rubicund, and rollicking. He recuperates, after an effort, by laughing at himself—ever the safest person at whom to laugh.

Undoubtedly the secret of friend Armstrong’s virile life and work lies in the reality and the depth of his religious experience. He enjoys a saving knowledge of Jesus Christ. He is warmly evangelical. Below the surface—hidden from every eye—is the fair image of Christ in the man’s own soul. Love of Christ has been the spring of all his service. Not ambition—not lust of place and power. He has been stirred, perhaps, too little by ambition. He despises this “last infirmity of noble minds.” Joy and happiness he finds in himself—in his home—in his books. He never needs to stir abroad to be deeply satisfied. Within his own breast are waters sweet and refreshing. This engine can lubricate itself. But when he has heard sounds on the tops of the mulberry trees, then he has bestirred himself. And as no man can for years irradiate good influences throughout a community without sipping oil and wine in return, so this our friend nilly-willy has won mines and power and goodwill and love.

Once in a while our busy “stalwart” may be met quietly sauntering down the street of an English town or city. At such a time you may imagine that he is accustomed to take life very easily. Of course, you will detect the pedagogue. The air of learning will arrest you. He may seem so fairly set and so well contented with all things. He will not be tripping along the pavement. But the soft going is only an indication that a thinker is worming his way to the heart of current affairs. This seemingly reposeful man has long wrestled with the deep problems of religion and philosophy. So has he accumulated strength. You may depend on him looking at all questions with his own eyes. He will not jump to a conclusion. He does not readily effervesce. He may only arrive at a decision via a series of set-backs. But he keeps doing. And once his course is set he is bound to carry the matter through. Needing little outside stimulus himself he is a great encourager of others. He loves, especially, to help literary aspirants. He has given a good lift to many a young man on the upward way. At the close of day he has plodded on for hours to enable some lad to master the intricacies of human learning.

To the outsider’ Mr. Armstrong’s home life seems to be perfect. His excellent wife has been with him wholeheartedly in all his work. The good father in Israel who married them says:— “Few men have been better mated.” Where true love subsists—where two people are in complete sympathy and are assimilating each others’ thoughts there grows a remarkable likeness, even in facial expression, as every reader of this sketch can see by looking at the photographs. Our friends administer a gracious hospitality. They keep an open house for Mr. Interpreter, for Evangelist, and for Goodwill. Indeed any pilgrim to the Celestial City is more than welcome. There are three sons and two daughters, all of whom are closely associated with our Church. The youngest boy died in 1910 after a brief and sudden illness. So father and mother, sons and daughter, stand shoulder to shoulder. They grudge no service—they spare no gift—to the Church they love.

George Armstrong of Broughton Moor is still on the sunny side of fifty and just in the heyday of his power. If his life be spared he will be a tower of strength to Primitive Methodism in West Cumberland. He will ever be found at his post. He will be one on whom we can rely for even better things as other days succeed. May his tribe increase!

George was born abt1864 at Cockermouth, Cumberland, to parents Joseph Armstrong, a labourer (1871), and Sarah Elliot.