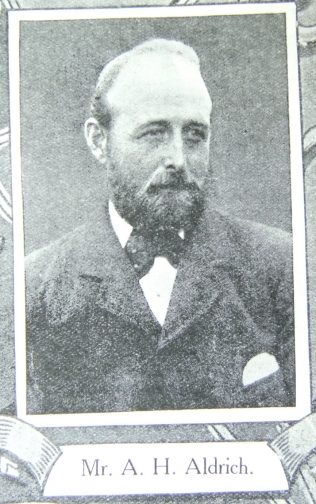 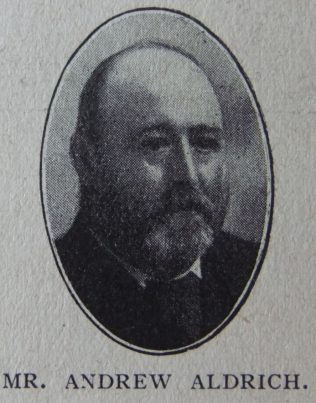 Mr. Aldrich, the Wangford Circuit Steward, is Suffolk-born, his native village being Chatfield. His early years were spent among the Baptists, theirs being the only Free Church in the immediate neighbourhood. Twenty-two years ago he married Miss Jane Black, a Scottish maiden, and removed to Darsham, where they joined our Church.

Being the largest employer in the parish, our church has gained thereby. There is a good understanding between master and men, they having many privileges that do not usually fall to the rural labourer.

During ten years Mr. Aldrich has serviced the circuit well. He is a quiet man, but his deeds are eloquent and effective.

Mrs. Aldrich is a good soul, combining the qualities of Martha and Mary, and making Darsham Hall a Bethany-like home. Long may she and her husband be spared to continue their noble work.

Andrew was born abt 1863 at Cratfield, Suffolk, to parents James and Louisa. James was a farmer.

Andrew was a farmer. His obituary records that he was built on a large and generous scale. He was a “great” man, physically, morally and spiritually. He filled the office of circuit steward for twenty-one years.

At the time of his death, Andrew was a member of the Suffolk County Council, Blything Rural District Council and Board of Guardians. He also served on the War Agricultural Committee and Tribunal.

Andrew married Jane (Jeanie) Black (abt1869-1914) at the end of 1887 in the Blything Registration District, Suffolk. Census returns identify eight of ten children.