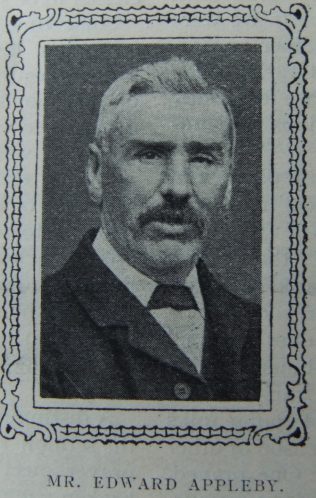 MR. EDWARD APPLEBY, of Langley Moor, Brandon Circuit, is a person of whom any church would feel proud. He was converted in August 1873, and received his first class ticket in February, 1874, from the Rev. C.G. Tetley.

As a labourer in the Master’s vineyard, his motto is to do anything and everything he can for Jesus. He loves mission work, is a zealous teacher in the Sunday School, and a faithful assistant class leader. He believes in personal dealing with people, and many are the souls he has saved by this means.

At present there are in the Langley Moor society, through his instrumentality, two reclaimed drunkards – one so quiet and beautiful in life and active for Christ, the other equally beautiful but a little more demonstrative, though not able to do much owing to age and infirmity.

Bro. Appleby does not stick at manual labour for the cause, and has done his share. Four years ago a Sunday School was built at Langley Moor, and alterations made in the church. To save expense Appleby laboured the first four days in the week from six o’clock in the morning till eight in the evening, and he did it for five months. The Friday and Saturday he devoted to his own business, and he declares that it never prospered as it did then.

His society stewardship has been characterised by tact, cheerfulness, and humour. He has also a fertile mind for devising plans to advance the society’s interests, and unlike some who are clever at making suggestions, but unwilling to aid in carrying them into effect, he will help to make them real, and not spare himself in doing it.

Edward was baptised on 15 July 1860 at Belmont, Co. Durham. His parents were Joseph and Isabella. The 1861 census return describes Joseph as a coal miner and innkeeper. He died before the 1871 census where Isabella is widowed and a publican.

Census returns give the following occupations for Edward,

Edward and family emigrated to Australia in April 1911.