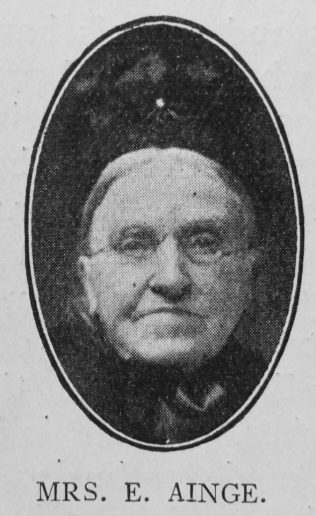 Transcription of obituary published in the Primitive Methodist Magazine by D. Sheen

Mrs. Elizabeth Ainge was brought into union with our Lord Jesus by means of the Conference camp meeting in Leicester, 1875. Forthwith she became a member at St. Nicholas Street church, and adorned the Gospel. by a holy life till called to the upper home on October 14th, 1912.

A practical believer in the communion of saints, she was a familiar figure in Mr. E. Jennings’ class for well-nigh forty years. She long filled the office of Bible-woman most efficiently, and in this capacity not only gave religious instruction, but frequently found situations for the unemployed, and otherwise helped the needy. Nor did she ignore the financial needs of the Church, but was most exemplary in contributing from her small store. The law of peace was on her lips and she turned many to righteousness.

In advanced years she found a home in Wyggeston Hospital, in sight of our Hinckley Road church, into which her mortal remains were brought prior to burial. We hope to meet our honoured sister by-and-by in the deathless land.

Census returns identify the following occupations for Eliza after she was widowed.

Note: Online records have her name as Eliza, not Elizabeth as stated in the obituary.