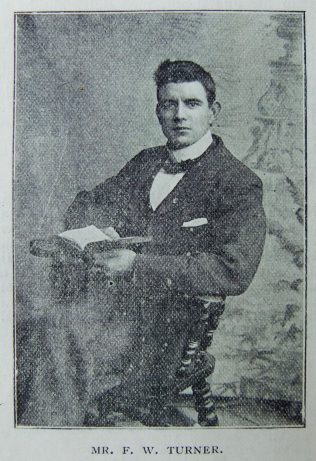 Transcription of Sketch in the Christian Messenger by E. Millichamp

New men, with newness of life, are God’s greatest gifts to His Church. The Church was founded and has been sustained by new creations. They still come and find their sphere. The Witney Circuit was supplied by Rev. J. Odell with Mr. F.W. Turner, a new man who began work at Wootton on January 1st. He had only been in training three months, and had tried his gift for a few days on the Cheltenham station. He spent eight weeks in the villages of this circuit and had about 20 conversions, mainly at Wootton, Fordwells, and Cambridge. On February 25th, he commenced a mission in the town, and continued three weeks; the interest increasing from day to day till the  chapel was crowded, and some 60 persons professed to enter the new life. This good work following a revival in November last has enabled us to add a considerable number to our roll, and give several to our sister churches.

Mr. Turner devoted one evening to giving the story of his life, which was of thrilling interest and was listened to by a large congregation. He was born in the city of Bristol 22 years ago and spent his early days in the old city. His father died when he was only a few months old, and his mother having to earn her own livelihood, he was placed under the care of a godly woman belonging to one of our societies and remained with her till he started life for himself. He did not tell us of his schools and schoolmasters, from whom he got his education in reading, writing and arithmetic, but gave some incidents of the wild life he lived when he slid beyond the control of the lady by whom he had been brought up. His Samson-like energy knew no bounds, and his wild and erratic nature led him into scenes of vice and mischief.

He became familiar with public-houses and singing-halls and spent his Sundays in climbing the cliffs at Clifton and swimming in the river Avon. He had several hairbreadth escapes from falls and drowning which had the effect of placing a check on his mad career, and leading him to think and change his course. A young lady, who had some influence over him, became his guiding star and led him to Whitehall chapel, where he was converted and joined our Society three years ago. With the new life came new thoughts and developments. He had a new Master and sought a new sphere for his gifts and energies, and after a little training under a local preacher he conceived the idea of becoming an evangelist.

He had been led to Christ by one of Mr. Odell’s Evangelists, and naturally sought guidance in the same direction. Mr. Odell had no opening, and there came a time of waiting, lasting twelve months. At length the call came, and following it the day of consecration. October 1st was the day of recognition at Langley House, Birmingham, of a raw recruit for training as an Evangelist. On January 1st he came to this old circuit, with 12 preaching places, far apart, and a host of local preachers, to conduct a mission. We planned him plenty of work, but considering his youth and inexperience, did not expect much beyond a kind of juvenile preaching, and some success in winning the hearts of children and very young people. It is just to Mr. T. to say our prejudices were soon cleared away, and we were filled with surprise and wonder at his personality and the phenomena of his work. His addresses have been of a high type, and have been delivered with great effect, while his off-hand talks in the prayer-meetings have reminded us of the skill of the fowler spreading his net and the fisher casting his line. His appeals were irresistible, and led to the salvation of many.

We give great credit to Mr. Odell for the discovery of such men. We are reminded of  the diviners in Cornwall we met with years ago who, by the use of a hazel rod, discovered the whereabouts of concealed lodes of tin and copper, and hidden springs of water. Mr. Odell discovers natural talent, and men who have hearts like a fountain giving out sympathy and love. We welcome his motto: ‘Evangelise.’ It is the same that appeared on the Mow Cop flag that floated in the air at the beginning of the 19th century. At the beginning of the 20th century we have the same motto and same flag. With our rich inheritance of institutions and spheres of service we can find employment for coming men. With new men will come the conquest of new territory, and everywhere will be seen newness of life.

Frederick was baptised on 15 March 1879 at Bristol, Gloucestershire. His parents were Frederic William and Ellen Eliza.

Frederick married Amy Beatrice Batt (b1881) in the summer of 1909 in the Axbridge Registration District, Somerset.

The 1911 census return identifies Frederick as a Congregational Minister.