You are here: HomenextPeoplenextFamily HistorynextGolden Wedding of Mr. and Mrs. J. Parish of Old Buckingham, Norfolk 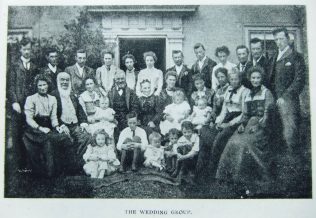 Transcription of Sketch in the Christian Messenger by J. Prouton

Rarely, if ever, in the history of this Circuit has such an interesting and popular event taken place as the celebration of the golden Wedding of our Brother and Sister Parish, who have been identified with our people at Old Buckenham for over fifty years, and are now in good health, and to all appearance likely to live and toil on for years to come, for which we hope and pray.

Mr. Parish was born in the year 1827, and has now reached his 75th year. He came of godly parentage, and was early brought to serious thought, knowing but little of the so-called pleasures of sin, his mind ever bearing towards truth and godliness. Mixing regularly with God’s people, the one great desire of his life was to become one of them, but did not fully yield himself to Christ till 22 years of age, when he united with the Primitive Methodist Church, under whose ministry he had been led to God. Twelve months after conversion he received authority to preach, and finding acceptance his name was quickly raised to the list of accredited preachers, where it stands to-day in the well-merited position at the head of the entire list of 45 local preachers. His record for faithful and ungrudging service should prove a stimulus and encouragement to our younger brethren, who are apt to forget the toils and sacrifices of their fathers in Israel. Though now somewhat enfeebled with age, he is still in active work as a local preacher, society steward, and class leader.

Mrs. Parish, when quite a girl, “was brought in” under the preaching of the Rev. J.C. Thurgur, and in 1852, after one year’s courtship, was united in marriage to Bro. Parish, whom we all delight to honour. The union has proved a most happy one, based on love, unity, and co-operation, in the midst of life’s struggles, through which God has safely brought them and their family of five daughters and four sons, all of whom are saved by Divine grace. Of the nine children, seven have married in the Lord, and the most of these are actively engaged in Christian Work. What hath God wrought?

As was fitting, this golden wedding was publicly celebrated on Sunday, August 3rd, 1902, by special services in our chapel at Old Buckenham, presided over by Mr. J. Parish, and attended by the entire family, including the sons and daughters-in-law, with some grandchildren. It was a memorable occasion. The chapel was packed. Both afternoon and evening service were conducted entirely by the Parish family, when, amidst general rejoicing, alternating with smiles and tears, and hearty responses, sacred solos, duets, with Bible readings were ably rendered.

Mr. J. C. Parish, the eldest son of Mr. Horace Parish, our Sunday school superintendent and local preacher, delivered brief and helpful addresses, while the father, in a beautiful and touching manner, gave the concluding speech, recalling the merciful dealings and loving kindness of God, and exhorting them all with purpose of heart to cleave unto the Lord.

Collections were taken in aid of Winfarthing New Chapel Fund, and the sum of £1 15s. was realised.

Mr. and Mrs. Parish were the recipients of several valuable presents from their family, and also congratulatory messages from friends both near and far.

This is indeed a model family, giving full evidence of mutual love and esteem, ever ready for every good word and work sancti?ed by the indwelling and out-working of the Divine Spirit.

May God bless our aged brother and sister, making their path to shine brighter and brighter unto the perfect day.

James Darius Parish was born about 1827 at Old Buckenham, Norfolk, to parents John, an agricultural labourer, and Mary.

James married Pamela Shaw on 13 February 1853 at Old Buckenham. Pamela was born on 26 March 1833 and baptised on 21 April 1833 at Old Buckenham. Her parents were John, a labourer, and Sarah. Census returns identify nine children.

On retiring the couple moved to Redgrave, Suffolk, to live with Elizabeth and her husband. Pamela died in early 1915 and James in the spring of 1923.