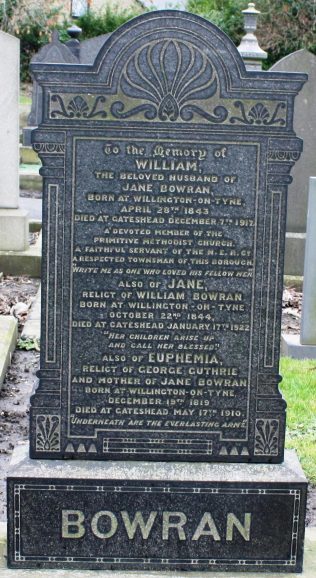 My mother’s parents were John George Bowran (1869-1946), and Eleanor Hedley Davison. They were married in 1911. This was John George’s second marriage. His first wife, Elizabeth Batey Robson, was the eldest daughter of T.J.Robson, an iron and steel merchant in Newcastle. Mr and Mrs Robson lived in Gateshead close to where the Bowran family lived. John George and Elizabeth were married at Prince Consort Road chapel in September 1893. Elizabeth’s mother’s maiden name was Ramsay, while John George’s mother was Jane Guthrie. John George used the name ‘Ramsay Guthrie’ as his pen name when he started publishing novels in 1899, and he also used these names for his first son, John Ramsay Guthrie, born 1897 and always called Jack. A second child, Elizabeth Mary, always called Elsie, was born in 1899.  Two more children were born later, William Norman in 1902, and Douglas Robert in 1903. In 1904 John George’s wife Elizabeth became ill with tuberculosis, which she caught when helping to nurse a woman who was dying from the illness.  Eventually the family moved to Hexham, which was thought to provide a good climate for the invalid.  Elizabeth died at Hexham in 1907. She was buried in the Hexham cemetery (as eventually were John George and Elsie) and the memorial service was held at the United Methodist school hall.

John George was instrumental in the building of a new Methodist chapel in Beaumont Street, Hexham. We have a photograph of the opening of the chapel in 1908.

Eleanor Hedley Davison came to Hexham as a house keeper for my grandfather, to help look after Elizabeth during her illness. Eleanor stayed in the family after Elizabeth’s death, and eventually married John George in 1911. She came from a family of builders in Gateshead that had moved to Chester-le-Street, and the marriage was held there. There were two sons and six daughters in the Davison family.  Apart from Eleanor, the other five daughters (Isabel known as Belle, Minnie, Madge, Claire and Amy) remained unmarried. My mother said something about the deaths of young men in the First World War in explanation, but she also talked about men coming on horse back to call on her aunts when she used to stay with them in Chester-le-Street after the War. We have a photograph of my mother aged 3, taken in 1916, sitting on her mother’s knee, with the other five Davison women standing behind their sister Eleanor. My cousin Malcolm Bowran tells me that the house in Chester-le-Street was called Oakhurst, and that the main London-Newcastle railway line ran past the bottom of the garden. (I see from the map that there is a house called Oakhurst at 6 North Road, which is parallel to the railway at that point, although another street is shown between North Road and the railway line. But this may be a later infill.) Malcolm also reminds me that two of the Davison sisters ran the post office.

In 1911 John George and Eleanor moved to Stockton-on-Tees (Methodist ministers tended to move circuits every few years), where my mother was born 15 April 1913.

John George was the third born of eight brothers, the others being William (became a journalist on the Sunderland Echo), Robert (founded the paint manufacturers Robert Bowran and Sons in Gateshead), George (ran a mission for the poor in Prudhoe Street, Newcastle), James (a salesman – my mother described his employment history as ‘questionable’), Thomas (whose employment I do not know),  Edwin (had a shop, Bowran Pianos, in Grey Street, Newcastle), and David Septimus (a scrap metal merchant, described by my mother as ‘the richest and kindest of them all’).

Prince Consort Road Church , the head of the Second Circuit, has been a conspicuous success. Like Durham Road, it has been the spiritual home of a generous and devoted people. Scope, the Bowrans, Barron, Ridley, Grainger, Hewitt, Johnson, Thirlwell, and a host more have been connected with the fortunes of this strong church for many years. As regards the Bowran family, their life has been interwoven with the society from its start.

A few men from Nelson Street commenced a mission in Worcester Street, in an upstairs flat. The Bowrans lived near, and the children went to the Sunday School. The father, an engine-driver, was drawn to the chapel when it was built, having been invited there by R. Bell, who was also an engine-driver. From that day he became attached to the place, and in this way all the family was secured to Primitive Methodism.

There are eight sons, and the success in life of each is remarkable. William, the eldest, is a local preacher in Sunderland, where he holds a position of trust on the Echo. Robert has built up a large business, is the choir-master of Prince Consort Road Church, was the conductor of the District Psalmody Association which did so much for the improvement of the service of praise in scores of chapels, and is a member of the Town Council. John G. (“Ramsay Guthrie”) went into the ministry when only twenty years of age, and the mark he has made as a preacher, pastor, and evangelist is heightened by the popularity he has secured by his Methodist idylls. George and his wife are the leaders of the Poor Children’s Mission at Shieldfield, Newcastle, in connection with the UnitedMethodistChurch, where some eight hundred poor children are under their care. Thomas is a local preacher, the organist of Prince Consort Road Church, and one of the school superintendents. James is at Prince Consort Road also. David S. is a local preacher, and one of the circuit stewards; and Edwin was the musical director of the Central Church, Newcastle.)

This family of eight brothers lived in Gateshead, first at 28 Askew Road, later at 4 Queen Anne Terrace. They were the sons of William Bowran, an engine driver, and Jane Guthrie. William and Jane were both born in Willington-on-Tyne, William on 23 April 1843 and Jane on 22 October 1844. They were married at All Saints parish church in Newcastle on 11 November 1865 at which time they were living in Stepney Terraces, Byker. On the marriage certificate William is described as a joiner, whose father is Robert Bowran, deceased, a husbandman.  Jane’s father is George Guthrie, a joiner. Jane Guthrie’s mother was Euphemia, a dressmaker born at Willington on 19 December 1819. By 1891 Euphemia by then a widow was living with William and Jane at 4 Queen Anne Terrace, Gateshead. She died on 17 May 1910. William Bowran died 7 December 1917, and Jane Guthrie died 17 January 1922. Euphemia, William and Jane are all buried in a family tomb in Gateshead east cemetery.