You are here: HomenextPeoplenextFamily HistorynextMr. and Mrs. John Wallis of Ruislip Common 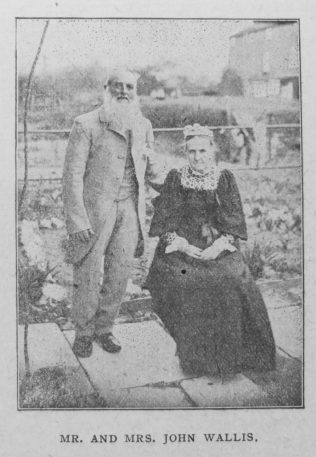 Transcription of ‘Sketch’ In the Christian Messenger by Rev. J.W. Everingham

The stories which can be told of some of our rural Methodist worthies give staying power to patience and quicken spiritual enterprise. On the long unwritten roll of such worthies, the two of whom I write, have been there several years. Both are natives of Norfolk County and had their sturdy training in Primitive Methodism in the Downham Circuit. Mr. Wallis’s father was a local preacher sixty-three years. Mr. Jacob Rose (Mrs. Wallis’s father) threw his energies into Sunday- school work, and was for many years a Wesleyan School Superintendent. Their homes were the kindly hostels for many a tired servant of the Lord, and this fact alone, is an open secret as to the prevailing atmosphere in which they were nurtured. This precious factor of Methodist influence in their impressionable years largely accounts for the patience, stedfastness and unwearying zeal which have characterised their whole life. Our friends united ages reach one hundred and sixty-two years and well over two-thirds of this figure – over fifty years in each case – have they been devoted members and ever earnest workers in our churches.

For the last twenty-seven years, they have been staunch and faithful in our Ruislip Common Society, They have lived for its spiritual and material interests. Mrs. Wallis, until very recently (owing to declining health) was a S.S. Teacher and the School Treasurer for twenty-four years. From girlhood she has been an enthusiastic Missionary Collector, and her box this year is well “up”. Keen is her interest in Missionary and Church matters, as quickly you learn, when in her presence, by the reminiscences she aptly recites. Mr. Wallis, still acts as a Trustee and as Society and Chapel Steward. He is a “character.” At once, when you see him, you are struck by his straight figure and surprising agility though passed four score years. But when he speaks, not only the originality of his utterance, but the sound common sense expressed, revealing keenness of intellect, expert judgment, and a long tuition in the school of experience, arrests you. Our friend, who has a high sense of civility, is just the one, whom you well know, if arguing with a bigoted clergyman or squire would not come off second-best. He has, rightly, a strong regard for the Lord’s Day. With one farmer he served nineteen years, and with another as Farm Bailiff for fifteen years, but in no case would he be engaged without Sundays free, save when cattle compelled attention. His “crossing of swords” with Sabbath-desecrators gets the truth home, to the confusion and shame of the offenders.

To hear them talk of the stalwart labourers in Norfolk—Revs. Key, Hammond, Scott, Meadows,  Tomsett. Smith and Seaman – whom they knew well on to fifty years ago and more, stirs the soul to fresh evangelistic efforts. God bless our friends! May they long be spared to us, and in the stress of these times – when twenty-nine grandsons and great-grandsons are under arms – may they be graciously sustained! God multiply to our church many like loyal souls!

John was born abt 1836 at Welney, Norfolk, to parents Joseph and Mary. Joseph worked the land.

John died in the spring of 1924 at Ruislip Common, Middlesex.

Note: Records do not back up the identity of Mary’s father as Jacob Rose.