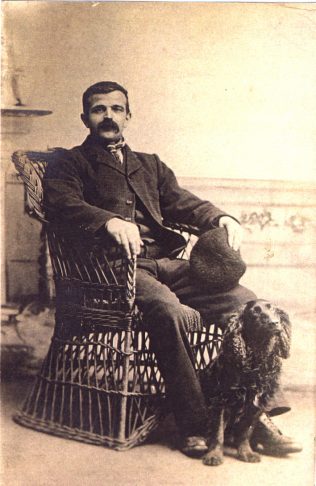 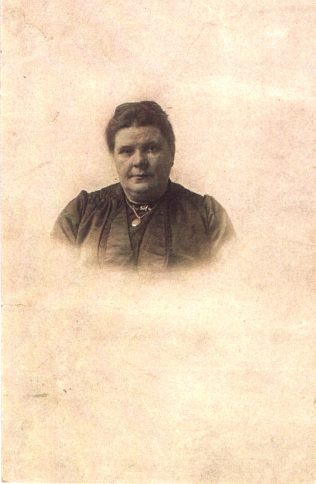 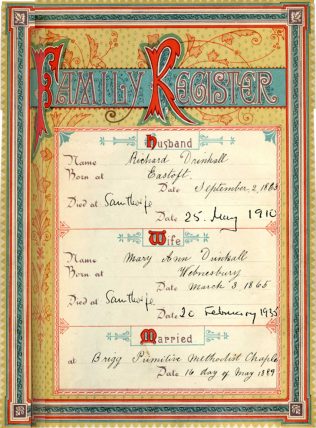 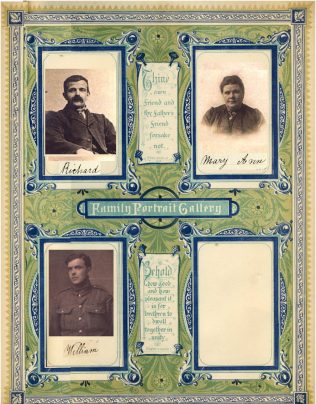 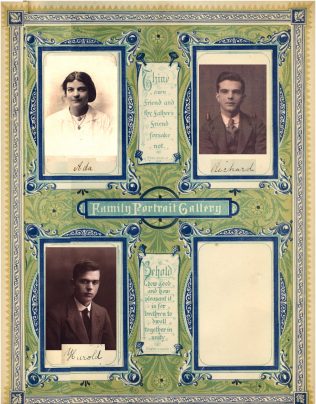 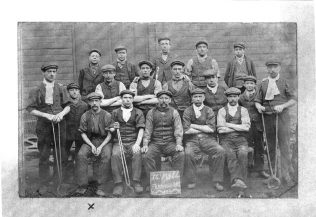 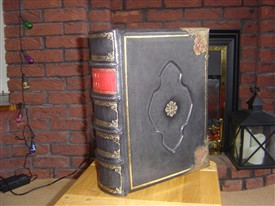 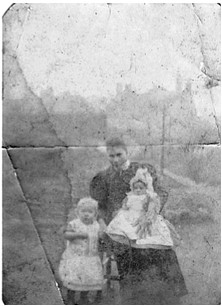 My father had a Family Bible restored in 1993. It records the marriage of my great grandparents at Brigg Primitive Methodist Church.

The (Illustrated) Family Bible, that John Drinkall (Richard’s Grandson) had restored, records that the wedding took place at Brigg Primitive Methodist Chaple (sic) on 16th May 1889.

Story of the Bible

The Bible was handed over to my father, John (son of Richard b. January 1899) by his cousin, Joan White (daughter of Beatrice b. July 10th 1891). At that time it was in a dilapidated state. My first cousin, Tony Booley, thought that (the ‘idea’ of recording family information in such a document as) the Family Bible should be resurrected.

Since that suggestion I have made contact with various descendents of our shared great grandparents. These include second cousin, George Ross (of Toronto, Canada) a grandson of Ada (b. November 1893), the aforementioned Joan (who lives in Cirencester), Ailsa Brasier, great grand daughter of Harold (b. October 13th 1903) and her mother Karen Lloyd, both of Scunthorpe.

Using scans of pages from the Bible I have produced ‘blank’ versions of various pages (Family Register, Children and Portrait Gallery), as well as electronically updated scans of the originals. I have suggested to ‘family’ members that they create their own versions in order to help realise my cousin Tony’s idea!

Richard Drinkall was born at Eastoft on September 2nd 1863. He worked (as did many in those days as an agricultural labourer before starting working mining ironstone. His death certificate list his “Rank or Profession” as that of a steelworker. He will have witnessed the 1909 strike that took place in the North Lincolnshire Ironworks. Alas, he died the following year on 25th May 1910 at Frodingham Road in what is now Scunthorpe.

The local paper (Scunthorpe and Frodingham Star) carried a report:-

“There were a large number of people in attendance at the Crosby cemetery on Saturday 28/5/1910, for the funeral of the late Mr R Drinkall. The Steel Works band, in uniform, were present. Richard husband of Mary Ann (Fowkes) lived at Grosvenor St. Crosby.”

Mary Ann Fowkes was born at Wednesbury on March 3rd 1865 and married Richard Drinkall at Brigg Primitive Methodist Church on 16th May 1889. Her first child, William was born later that year on October 25th. The following is an extract from a letter that my father, John Drinkall wrote to his sister, Mary sometime in 1985.

“After she was widowed, Grandma Mary Ann started the Bakery and shop helped by Uncle Bill (after he got out of the army), Auntie Beatrice and Auntie Ada. When the bakery needed a motor van a driver had to be employed. The first was a bad timekeeper so didn’t last, the second couldn’t get the van out of the garage and the ten foot (?) without scraping Gurnell Street School railings so Grandma sacked him and asked Dad to take over. Prior to the van there was a green hand barrow with side doors and “Drinkalls Bread Often Buttered Never Bettered” in gold letters on both sides which for many years was tucked away in the dark recesses of the garage at the back of Berkeley Street. Incidentally Uncle Harold called “Mick” within the family and by Auntie Annie tilled the plot of land and had  a shed/greenhouse where Dad had the lock up garages built later. So it looks as though Drinkalls Bread started before 1914 and Dad must have joined up before he married Mother in 1927.”

When her husband died, Mary still had a number of children to support (the youngest – Harold being 6 years old). At a time when there would have been little state support her efforts to build a future for her family suggest (by modern standards) that she was a tough, formidable woman. Certainly an ancestor to be rightly proud of!