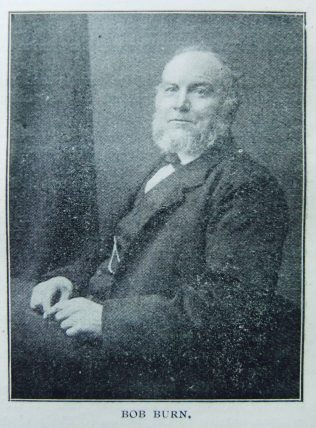 Transcription of Sketch in the Christian Messenger by B. Haddon

BOB BURN’S wife was a sensible Christian woman, who, by her genial disposition and good management, sought to make home comfortable and attractive. Yet Bob, who was one of the best-known men in Crippleton, spent very little of his leisure time at home. When they were wed he solemnly promised to give up the drink and accompany his wife to the Methodist chapel of which she was a member, and for which she made many efforts and much sacrifice. His pledge, however, was soon broken, and he relapsed into his former drinking habits, spending most of his evenings at “The Fox.”

“And did you never go to chapel in those days?” I once asked him.

“O, yes,” he replied, “but as a rule I went straight from the chapel to the public-house; and I’ll tell you something more,” he added, with considerable emotion, “we have taken preachers to tea for thirty years, and for anything I know I was as glad to see them then as now.”

Now, though Bob’s ways were a great disappointment and grief to his wife, yet she never reproached him with doing wrong, nor tried to preach him into being better. Being “talked to” was the one thing he could not and would not endure. And so, when a certain local preacher, being planned at Bob‘s house for tea, began preaching to him about religion, Bob unceremoniously got up from the table, put on his hat and coat, and, without saying a word, walked out of the house.

“Ah,” said the preacher, “the arrow of conviction has gone home!”

Mrs. Burn, knowing her husband so much better, could scarcely restrain a laugh.

“Nothing of the kind,” said Mrs. Burn, frankly, “I should say he is offended.”

That night the preacher made Bob the subject of a public prayer, which, hearing of it, so angered the man that he resolved not to go to chapel again.

Now, though so much addicted to the drink, Bob Burn was not a really bad man. Even then most intoxicated he was not quarrelsome, and he never gave his wife an unkind word. Yet, being a powerfully-built man, it was dangerous to trifle with him. Drunk or sober, he strongly resented a mean act. And so when Joe Pickard, taking advantage of Bob’s helpless drunken state, struck him in the face, Bob swore that the first time he met Joe sober he would take full revenge for that mean and cowardly blow. And though the desired opportunity did not come for some months after – for they lived several miles apart – yet in the meantime Bob Burn remembered his oath.

It was during some special revival services at the chapel that a sad accident occurred at the quarry where Bob Burn laboured.

“Lass,” he said to his wife one morning, “I’ve had a very nasty dream.”

And it was well for him he did, for a huge stone, slipping out of its place, fell upon Bob’s mate and killed him instantly. Naturally, this fatal occurrence considerably affected Bob Burn, who felt and appeared uneasy all that day. And the lady evangelist, being at his house that afternoon for tea, seized what seemed an opportune moment to speak a word of warning.

“Providence is wonderfully kind,” she continued.

“ Yes,” Bob replied; at the same time wondering where the kindness of Providence was in his mate’s case, who had left a wife and four little children.

“God has given you another call, Mr. Burn,” she added, “He has knocked very loudly at your door this time.”

“I do hope you will take warning, Mr. Burn,” she pleaded, “Won’t you come to the service tonight?”

“No,” Bob replied, and he emphasised the decision by walking straight off to the public-house.

There he met with a jolly company of neighbours, who chaffed him a great deal about the “woman preacher” at the chapel.

“They mean to get thee into the net, Bob,” said Jack Smith.

“It’s strange they should have to send so far for a woman to convert thee, Bob,” said Tom Binks, “though I must confess she’s rather a beauty.”

And the whole company laughed boisterously at the idea of Bob Burn turning a preacher.

“She’s caught on with him, I can see,” said Harry Brown.

“Nay, lads,” Bob replied, “there’s no need to send for any woman to convert me. There’s no woman outside of Crippleton so likely to do that as one inside, and that’s my own wife.”

“Thou’s got a good wife, Bob,” said Tom Binks, beginning to reflect a little. “If I had had one half as good as your Polly I very likely wouldn’t have been here to-night.”

“Nor I,” Jack Smith remarked.

“I say, lads,” said Harry Brown, with his usual shallowness, “I shall start a prayer meeting and put up a penitent form if you go on talking and looking like that.”

But, strange to say, no one seemed to relish the joke except Harry Brown himself.

“If a good wife counts for anything,” Sam Taylor remarked, as he pushed a glass of ale from him, “it’s a shame for me to be here.”

And at that moment there came over, Bob Burn such a sense of disloyalty to the woman who had loved and served him so faithfully that he felt unutterably guilty and miserable. He said nothing, but that night’s experience marked a turning-point in his existence.

The following Sunday night he was at the same public-house as usual, but he did not enjoy himself as aforetime.

“Listeners know more than talkers,” the landlord remarked, as he served Bob with another glass of ale.

“But he little thought what I was thinking about just then, sir,” Bob said to me, years afterwards. “I thought if ever I get out here I’ll never come in again.”

Monday night came, and Bob never left his own fireside. His wife made no remark, though she thought it very strange. But she was more surprised when the same thing happened on Tuesday night. Still she asked no questions. But when he did not go out on Wednesday night she felt constrained to ask if he was not well.

“I am all right, lass,” he answered, and the matter dropped there. But as he did not go out on Thursday night she decided there must be something.

Mrs. Burn was speechless. The news seemed too good to be true. And yet for this she had patiently and persistently lived and pleaded all these years. Friday and Saturday (special nights with him) Bob still adhered to his resolution. But on Sunday morning he had a hard battle to fight with himself. A foot race, in which he was particularly interested, had been fixed for that morning. Conflicting thoughts rushed through his mind. At first he resolved to go and see the race and come straight home again. Then he reminded himself that Joe Pickard generally attended these races, and to see him meant giving him a sound thrashing. Moreover, if he went he might be tempted to drink. Finally, he wisely decided to stay at home. But he had another battle to fight before that day ended. Having taken tea he washed himself, and then, without coat or vest on, he took a chair and sat silently gazing into the fire for several minutes. His wife was all curiosity, but did not speak. At length Bob himself broke the silence.

He had not had them on for the last twelve months, except at a funeral.

“ Only to chapel,” he replied.

Mrs. Burn soon had Bob’s best clothes airing and warming before the fire; and, having dressed, he accompanied his wife once more to the chapel. His unexpected presence there caused quite a sensation, which increased when Bob remained at the prayer meeting. The least excited person was Bob himself. The great victory had been won before he entered the chapel. That night, as his subsequent life abundantly proved, he surrendered himself fully to God, and started a new life.

But the next day a most extraordinary thing occurred, which Bob Burn himself related to me years after as I sat taking tea at his house. He had to go some three miles from home that morning on business, and the journey had to be done on foot. He had not gone more than two miles when who should he meet but Joe Pickard alone.

It was Bob Burn’s wilderness temptation, a fight with wild beasts.

“ And how did you manage P” I asked, eagerly.

Bob did not answer for a moment, and I observed his lips quivering. At length, mastering his emotion, he said:

“ Now then, I thought, here‘s the chance I’ve been waiting for all these months.”

“And what did you do?” I asked, getting a little excited.

And thus did Bob Burn give undeniable evidence of the soundness of his conversion.

Bob’s wife had gone to heaven before I knew him, and so I said to him:

“Now, “Mr. Burn, did the drink tempt you much afterwards? ”

“Not at all, sir,” he replied. “I asked God to take away the appetite, and He did. But mind you,” he added with a smile, “I nearly ‘sweeled’ away.”

“And what really led you to become a Christian? ”

“Nay,” he replied, with choking emotion, as he pointed heavenwards, “My Fayther (God) had the most to do with it.”

I have not been able to identify Bob in census returns from the information in the story. Can anyone point me in the right direction?