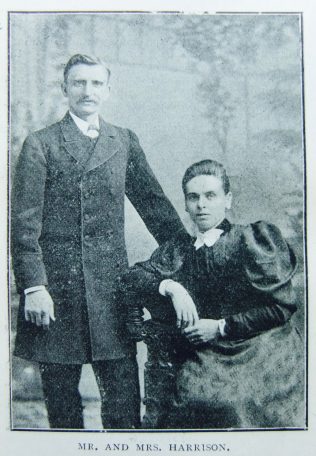 Transcription of Sketch in the Christian Messenger by A.J. Campbell

MR. AND MRS. HARRISON, of Birkenhead, are among the most valuable and useful of the accessions to Primitive Methodism within recent years. Seven years ago they were but little known within our borders. They occasionally visited villages and towns where our Church was established, and which partook in the success of their evangelistic labours; but some six years ago the evangelists definitely decided to join our Church, believing it to be most suitable to their religious temperament, and affording them most scope for the exercise of their evangelistic ministry. They joined our Mount Tabor Church at Birkenhead, and during their three months’ residence at home during the summer they are constantly engaged in service for our Church in some original and useful way, for they are nothing if not decidedly original. They have the gift of initiative and resource, and, their whole life is lived in projects and schemes for saving men and building up the Church. .

Their distinctive work of evangelism began in the slums of Liverpool; it was here they “graduated.” They did hard, strenuous work among the lowest classes of Liverpool, and neither of them regrets having commenced among the publicans and sinners of society. Their experience in slum life was alluring because of their passion for the lost; it was educative because of the lessons they learnt out of the strange book of human nature. They gathered many “gems” for Christ out of these Liverpool slums. The present manager of a men’s shelter was a publican in the neighbourhood of their mission hall. Mr. Harrison one day stood near this man’s house, and his quick eye saw in the window an advertisement for somebody’s “bright, sparkling, pure ales.” This gave the evangelist a topic, and the message went home to the publican’s conscience; he gave up his public-house and came out for God, and to-day is “sheltering” men from the very drink he once sold them. The constant toil of the slums and the peculiar atmosphere of sin which steeped the place deeply affected Mrs. Harrison‘s health and caused a physical breakdown. She was literally carried away from her work on a stretcher; but after a short rest the passion of work laid hold of them, and the call of God came clearly to them to go out and do the work of evangelists. Their first call was to Hanley. Their mission was so successful that they were requested to remain and permanently superintend the work, but a definite, limited locality was not fitted to their genius, they must go about doing good. Market Rasen was next visited, and copious blessing fell on their work in that place. It was while here that Mr. Harrison was pained to hear of the Circuit seeking relief from its second minister. This roused his inventiveness, and he at once suggested a scheme for raising £1,000 to clear the chapel debts and enable the Circuit to retain the second preacher. More than the £1,000 was raised in two years as the result of Mr. Harrison’s scheme. After tarrying at Belfast and Dublin for a few weeks the evangelists crossed over to Scotland and held remarkably successful missions at Motherwell, Parkhead (Glasgow), Pollokshaws, and Blantyre. They next visited the North of England, holding missions at South Shields (Glebe), Tyne Dock, Consett, Darlington, Newcastle (Maple Street and Kingsley Terrace), Hexham (twice), Bishop Auckland, Tow Law, Chester-le-Street, and Birtley.  Moving further south they held missions at Burton-on-Trent, Grimsby, Cleethorpes, and Hull. The mission at Tow Law was one of the most significant and soul-stirring in the history of Northern Methodism; it abounds in incidents sufficient to fill a book. Most of the missions have been characterized by some distinctive feature which makes the mission stand out conspicuous, arresting, and never to be forgotten. At one mission the chief feature was the number of husbands and wives who together began the new life. At another “young men” were seized with a holy passion to be saved. Another mission was marked by the gathering in of gamblers and drunkards, while yet another was conspicuous by the number of backsliders who came back to the Father’s House. One mission stands out prominently as the beginning of a social movement in the form of a men’s shelter and the building of an orphanage for children.

Their work has been many-sided, and cannot be adequately described. We cannot keep a ledger account of the income and outgo of spiritual forces. Their record is on high. And what of the evangelists themselves? In every way they are a fine example of the blending of opposites. Mr. Harrison is a real John Baptist among the Methodists; a bold fearless, heroic servant of God – one of the most courageous men I ever met. An account of his many deeds of personal daring undertaken for Christ would read like a chapter from the literature of romance. Mrs. Harrison is in the succession of the noble women of the New Testament – one of the daughters who prophesy; a winsome, thoughtful, gracious presence that moves among the people like one anointed with perfumed ointment for the service of her King.

Mr. Harrison is a man of the people. He knows their way of life, their temptations, struggles, and aspirations. He can meet them on their own ground, and looks at life from their angle of vision; they listen to him and hear him gladly. Some of his most successful work has been done in the interval, at meal times, on pit heaps, factory gates, and pattern shops. His strong commonsense and power of popular speech, his illustrations from the daily life of the men, his true-heartedness, his honesty, his transparency alike appeal to the workers whom he addresses.

Mrs. Harrison is the only daughter of Mr. and Mrs. Woodhead, of Gainsboro’. She was reared in that godly home; her piety was nursed near the Cross. Educated, musical, gifted, with power of utterance beyond the average, she has given herself without reserve to God and His work. She is one of the best of our lady preachers, with a charming style, graceful manner, and with messages that are tender, inviting, wooing. Her large, rich heart over?ows always into her speech, and every sentence is drenched and saturated with prayerfulness and urgency.

In his preaching Mr. Harrison is intensely practical, forceful, quaint – a man in a white-heat of earnestness. There is only one Harrison; his duplicate could not be found. He sees the truth vividly, expresses it earnestly, and behind the fiery message is a strong, robust, godly manhood, the best witness, after all, to the truth he so fearlessly utters. His preaching, however, does not end in the preaching service; his method in the after-meeting is an object lesson in how to do it. So varied, interesting, spiritual, so full of tact and resource, his appeals in these after-meetings are splendid specimens of holy ingenuity and inventiveness.

One reason of their unique success is their constant prayerfulness. They know the pathway up the mountain and come back among the people with luminous messages direct from the secret place of the Most High. How near and vivid and vital is their relation to God! How they depend absolutely upon God for everything. Why, their “Faith Teas” are to doubting Thomas a perpetual marvel. Mr. Harrison will tell you with all the simplicity of a child, when you ask the philosophy of the Faith Tea successes, “it is all in the Book” if you only go to the right place and in the right spirit. He consults God about every detail of his mission, from the getting of a penny bun to the saving of a soul. And this simple trustfulness reacts on our churches. The missions are always financially as well as spiritually successful. The interest of the evangelists is wide and many-sided. It is no new thing for Mr. Harrison to launch a scheme for assisting burdened Trusts, and, what is more, he sees that his schemes are carried out.

To settle once for all the relation of Mr. and Mrs. Harrison to Primitive Methodism, I may state that they are ours “body, soul, and spirit, pony and trap.” They are not unattached evangelists; they are very much attached to Primitive Methodism. We thank God for them; they are His good gifts to our Church. We are doing well to prize His gifts and use them. We have in them two loyal servants of our Church, who have come to “go” – to go among our churches with one holy passion burning in their hearts, the passion for saving the lost. Give them the opportunity – a village or a town wholly indifferent to God – and they will, under the Spirit’s guiding hand, leave that village or town in the condition of seekers after God.

I have not been able to identify the Harrisons in census returns. Can anyone point me in the right direction?

Albert married Annie Priscilla Woodhead (b1866), daughter of John, a joiner, and Martha Woodhead, in the spring of 1893 at Gainsborough, Lincolnshire.

Searching the online Primitive Methodist Leader identifies a Mrs Albert Harrison as a connexional evangelist in 1907.