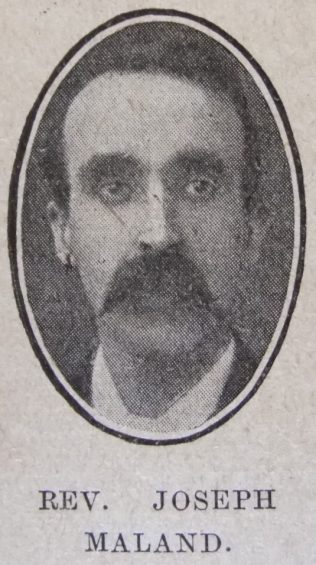 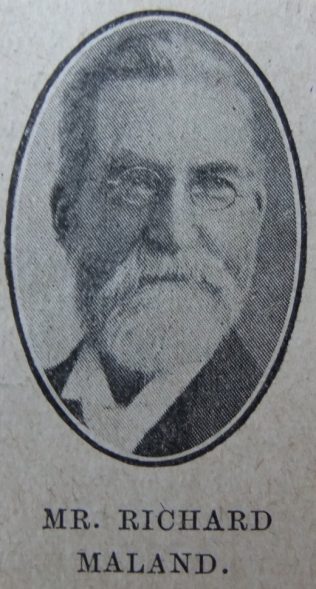 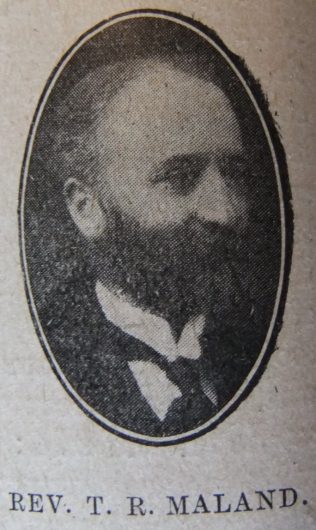 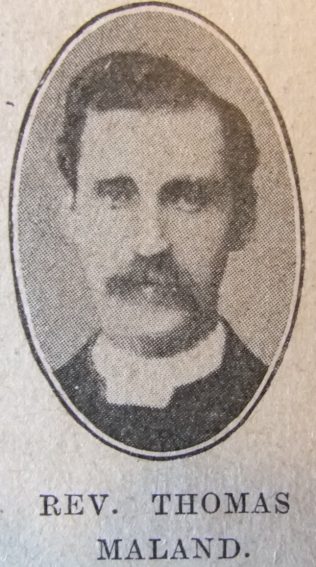 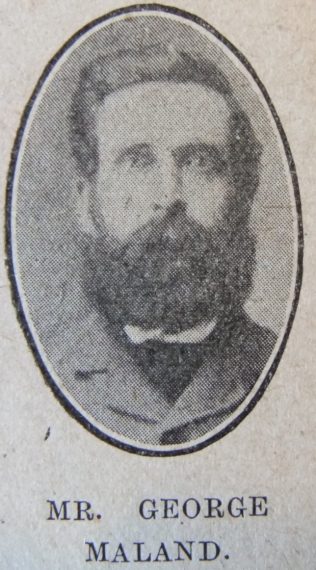 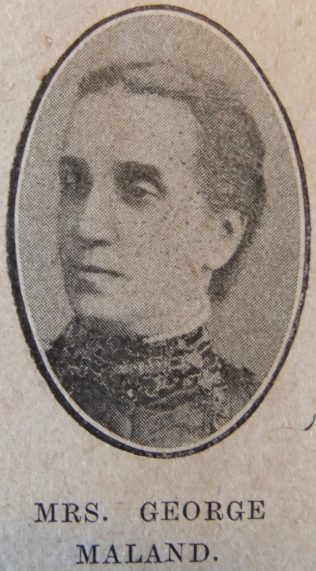 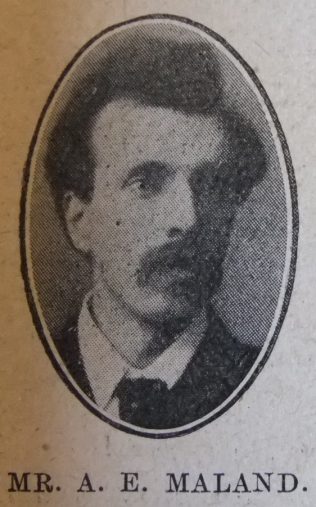 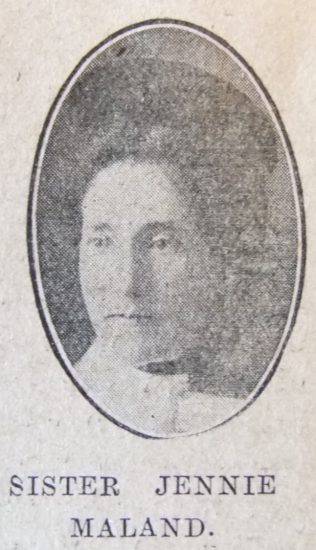 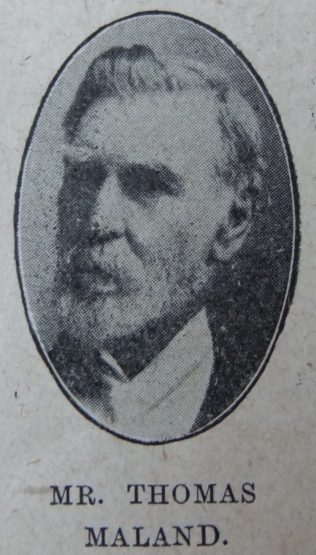 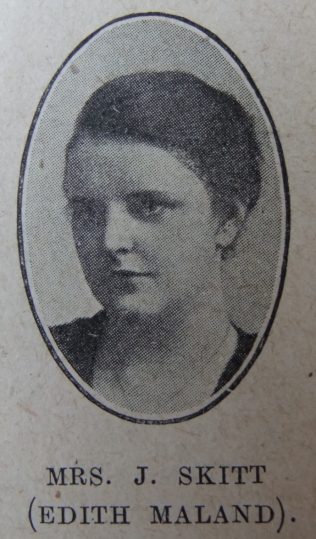 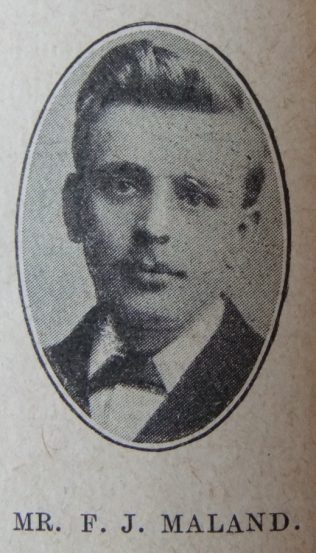 Transcription of ‘Sketch’ In the Primitive Methodist magazine by Rev J.E. Leuty

Among the “ Worthies” of our Connexion the Malands may safely be placed. Born in the vicinity of “The Mount of Blessing” their influence has spread far and wide. On the maternal side they go back to the roots of Primitive Methodism. Gracious traditions lie behind them, and they have been honourably sustained. There are worthy sons of worthy sires. This is as it should be, but alas, not always realised. What a joy to look down a long line of ancestry and find piety and power, grace and blessing! The present generation has a high record to maintain, and this brief sketch will at least in part, show how it is being done.

The old Burland circuit produced Mr. Wood, of Nantwich, who confidently asserted that the blessing of God would rest upon his children, and children’s children, to the third and fourth, generation. This faith has been honoured. Mr. Wood’s daughter, Lydia, was the grandmother of the three brothers Richard. George and Thomas Maland. Lydia’s daughter, Martha, married Joseph Maland, who resided at Cox Bank, (now in the Crewe II circuit) and the two were devoted members, leading quiet, godly lives. These two, by the blessing of God, gave to the Church the heads of the families whose careers we follow.

The three brothers, Richard, George and Thomas, left Cheshire for Staffordshire more than fifty years ago, and settled at Newcastle-under-Lyme, and from this place their influence has gone forth. Converted village lads, strong and sturdy, they gave themselves to the Church at Newcastle with a will, and all three have made an honourable record. The late Rev. James Barnes once said, “I have never seen three such brothers in a church,” and the writer of this article can testify that there is weight in the assertion.

The senior brother, Richard, now in his 77th year, has been a tower of strength in the Highland Church, Newcastle. All the important offices of the Church and Scholl have been given to him, and he has both adorned and efficiently worked them. A man of high souled principle he is trusted and loved. As Local Preacher, Class leader, Trustee and School Superintendent, services requiring varied talents, he has accomplished great things. For many years he held the position of Trust Treasurer, and through days of darkness, struggle and difficulty, was faithful. A more steady, loyal and upright man cannot be found. One regrets his waning strength and wishes for a peaceful ending to a long and laborious life.

His all too recent heavy loss in the partner of his life has undoubtedly told upon him, but he is brave and his family is near. His only daughter is with him and the Rev. T.R. Maland, his son, is travelling his fourth year in the circuit of his birth and training. After serving twelve stations in the Connexion what a joy, in the prime of his manhood, to be serving the people of his early days with acceptance and success! Another son is Society Steward, Arthur S. Maland, a young man of stability and genuine worth. Yet another is active in the Brotherhood, Joshua, who is faithful to the Church of his father. May they long live to perpetuate the sterling service of their family!

George Maland I never knew personally, he had passed to his reward before I spent four years upon the Newcastle circuit, but he left a name fragrant with all that is good. He was naturally refined, tender, and sensitive. He won for himself a unique place in the church, and was rich in the esteem of all about him. The last meeting of fellowship with his brothers has been described to me as one never to be forgotten. Up to the limit of his strength he laboured for the people he loved. This spirit he infused into his children, and they live for the glory of God, and the good of men. His wife, was associated with the Higherland from her girlhood, a scholar, teacher and member of the choir. She is the only mother alive belonging to the three families, and may well feel an honest pride in her children. Widowed at the early age of thirty-nine, she has wrought miracles. She is well known to the writer, a good woman, full of faith and the Holy Ghost. The four children are all actively engaged with us, and doing splendid service.

The Rev. Joseph Maland has just celebrated his majority in the ministry, and is stationed at Rotherham, where he spent the whole of his probation. The five circuits that have been the scene of his labours, during the past twenty-one years have been favoured. This article is neither a panegyric nor a criticism, or a careful digest might be given of Joseph’s ability, mental outlook, and administrative tact, gathered from his circuits, personal knowledge, and literary output. He is a preacher, a writer, a statesman. His six years in Darwen, following some of our ablest men, left an abiding impression. He is a welcome member of “Ministerial Associations,” and what he writes in our Magazines is read. He has something to say before he writes, or speaks, and does both with conviction.

He is in sympathy with all movements for the young life of our Church, and has distinguished himself at District Synods when speaking on their behalf, Given health and strength he must be heard of, and take a lead, Before accepting any kind of office he gave himself unstintingly to the routine work of his circuits, and got thoroughly grounded in their requirements. Like all the Malands he has a good appearance, a resonant voice, a modest demeanour and persistency.

His brother Thomas has been in the ministry since 1906. The last Conference appointed him to Guernsey, believing him to be the right man to deal successfully with the grave difficulties that beset our work there. The Nottingham, District valued his work so highly, that he was sent as a delegate to Conference when he had only travelled nine years, an exceptional instance. Already he has held the position of District Orphanage Secretary, and Equalization Fund Secretary. Like his brother Joseph he is a power among the young people.

Mr. Albert E. Maland, another brother, is a local preacher on the Eastbourne station. He is also a Class Leader and C.E. Worker. He is particularly popular on the Brotherhood platform. A keen and enthusiastic student of social questions he is a leader of the right kind for working men. For three years he did noble work as a missionary in North-West Canada, and since his return has served our Churches at Crewe, Bromley, and Beverley with acceptance.

The only daughter of Mr. and Mrs. George Maland is well known as Sister Jennie. Associated with our Higherland Church, she was prominent as a Sunday School worker and C.E. enthusiast. This prepared her for the call of the Rev. James Flanagan to the South-east London Mission, where she spent five years, three of which she was Sister-in-charge of the Sisters’ Settlement. After

This she was five years at Darwen, Lancashire, where her services were of the best order, and won for her the love and gratitude of the people.  A “Women’s Own” was commenced for social and religious fellowship, in which many lives were changed and transfigured. Her work was recognised by all classes of the community. From Darwen she accepted a call to Norwich “Scott Memorial” Church, where she is still labouring. Having entered upon her sixth year is a proof of the value of her work, and the appreciation in which she is held. She occupies with acceptance the pulpit‘s of the circuit, and visits among the poor and suffering. At a recent garden fete for the Sisters’ Fund £38 was raised, a fine testimony to the stability and reality of her labours. Martin Luther said “ Earth has nothing more tender than a womam’s heart,” and Miss Maland has shown womanly tenderness in dealing with the crushed and broken in life. Many her life be spared to continue beneficent labours of past years!

And now we come to the third and last of the senior brothers, Mr. Thomas Maland (or Mayland, as he prefers to spell the name), who has been a member of the Church for over fifty-four years, a  Local Preacher and Class Leader for fifty years, and Sunday School superintendent for fifteen years. In each capacity he has done fine service. Few men are better known in North Staffordshire pulpits. For thirty years he has preached the Harvest Festival sermons at Dale Hall, Burslem circuit. His calls have been numerous but his own circuit always had first consideration having preached in the Higherland pulpit every quarter for fifty years. An “inspirational” preacher he reaches at times wonderful flights of eloquence, and moves his audiences greatly. Previous memories remain of his Class leading, and indeed on the experimental side he excels. His prayers are a benediction, a secret glow, a rising flame, until the place is filled with unction. The late Edward Mather told me he had seldom been in such prayer-meetings as those at the Higherland on Sunday evenings. The brothers Maland contributed largely to the atmosphere of these remarkable spiritual feasts. It has been said that “A man comes to his height through disappointment” and there seems some justification for the statement in Mr. Thomas Maland’s life. He has had a large family and much affliction, care and worry with business, but he has lived above them and been triumphant in spiritual things. All his children are in the service of the Master—Fred J. Maland, a Local Preacher nineteen years, eight of which have been spent as a Lay Agent in our Connexion – Mrs. Skitt (recently widowed by the war, her husband being killed in action) became a Local Preacher under the guidance of Mrs. Leuty, and remains a. teacher and C.E. worker – William is a highly respected member of the choir at Harehill’s Avenue, Leeds. Others are serving in various ways the Church of God. The late Mrs. Thomas Maland was a woman of quiet ways, faithful in her household, regular in her attendance at the House of God, and beloved by her children. “They rise up and call her blessed.”

It only remains to be said that the brothers Richard and Thomas have been members of the District Committees for many years, and both have been honoured as delegates to Conference.

Richard Maland was born abt 1841 at Audlem, Cheshire. Census returns identify the following occupations for Richard.

Richard died on 18 October 1919 at Newcastle-under-Lyme

George Maland was born abt 1844 at Audlem, Cheshire. Census returns identify the following occupations for George.

His probate record describes George as a grocer.

Thomas Maland was born abt 1847 at Audlem, Cheshire. Census returns identify the following occupations for Thomas.

(Thomas started to use the spelling Mayland after the 1881 census.)

Thomas married Sarah Ellen Rhodes (abt1851-1915) in the summer of 1872 at Newcastle-under-Lyme. Census returns identify eleven of twelve children.