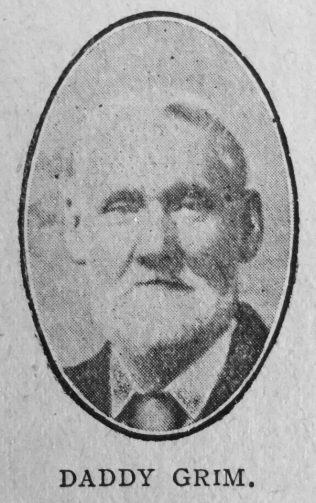 Transcription of ‘Sketch’ In the Christian Messenger by Rev. G Faulkner

IN a narrow street situated in the East End of London, in Poplar to be precise, there lives, on the second floor of a certain house, an old man and his wife. It is of the man – Daddy Grim we shall call him – that I want to write. He is a Primitive Methodist, and something of a character. I have been to see him to-day, for at present he is ill. I climbed the rickety stairs with caution. They were shrouded with gloom in spite of the fact that a large portion of the ceiling had fallen, and one could see the sky through the roof.

Daddy was sitting in the front room watching the children at play in the street. He seemed somewhat downcast. He had attended the “orsepital ” the day before, and the doctor had given a depressing verdict. Soon, however, we began to talk about religion, then his face brightened and his speech was punctuated with humorous sniffs, and happy little chuckles. Religion to Daddy is a thing of joy. He is a natural humorist. He certainly does not believe that religion was designed to make his pleasures less. Nor is his joy assumed; it is part of his very life.

He told me of a dream he had had. He thought that he was at gate Of Heaven The guardian angel was a very up-to-date gentleman, in fact he was dressed as a footman, resplendent with buttons, and crowned with a tall hat. How the old man chuckled over the recollection! But Peter, or whoever was on duty, let him stand in the porch and peep through the door, and see Jesus in His glory. Daddy just had a glimpse and then he woke up. He was not in heaven, but in the little room he calls home. He got out of bed and thanked God for the dream, concluding his thanks with the words: “Lord! when I get there and see You I’ll hug You.” Very irreverent, I know, but not to Daddy. Heaven for him is a place of material splendour, a gorgeous mansion, grander than Buckingham Palace, where Jesus, a personal human friend, is waiting to shake his hand in welcome.

You should see and hear him lead a class. One Sunday afternoon I went into the vestry of our Chrisp Street Chapel. The old man was taking the class that day. He came to us in turn, carrying his chair with him and sitting down before each member as he asked for their experience. He stood up to reply, sometimes putting his hands on the shoulders of the one to whom he was speaking. Some of the things he said I shall not easily forget.

A sister had found life hard during the week. Daddy was very sympathetic. He reminded her that when a little child cries, the mother takes out her pocket handkerchief, wipes the tears away, and he continued: “When you get to heaven the Almighty will take out His white pocket handkerchief and wipe away your tears.”

A brother had had a week of failure. At the bidding of the leader we sang, “Are you washed in the blood of the Lamb?” When we reached the end of the second verse, Daddy turned to the backslider and said: “ Now brother White, down on your knees and get washed! ”

Daddy is often unconsciously humorous. One Sunday night I asked for testimonies. He jumped up and said, “ I have a lot to thank God for. I might have been in heaven, I had a narrow escape last Tuesday night.” It appeared that on that occasion he had fallen down some steps. Still more recently the chairman of a public meeting was describing a preacher he heard in boyhood. “During that service,” said the speaker, “the fires of hell were seething about us.” “ Good!” cried Daddy, “I should like to have been there.”

He is fond of interjecting remarks during the singing of hymns. A few weeks ago, shortly after an air raid, I was taking a weeknight service. We sang a hymn commencing “Under His wings.” “That‘s my address,” said the old man. “The booms (bombs) cannot harm me there.”

He is very catholic in spirit. There is probably no Nonconformist church in the district at which he has not spoken. He is in great demand for Brotherhoods and Women’s Meetings. He counts an Anglican vicar, a D.D., amongst his friends. Daddy never leaves this gentleman without praying with him.

Was the subject of this sketch George Daniel Grim (1842-1924), a carman (carter) from Limehouse, who later became a nightwatchman?