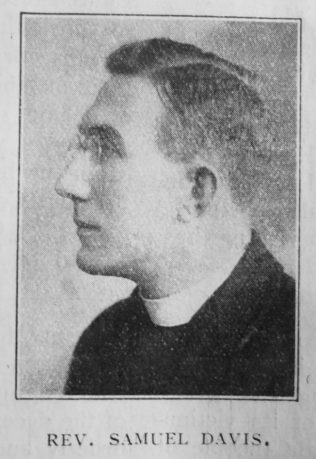 SAMUEL DAVIS: born at Millom, Cumberland, on 3rd July 1892. He heard the call to the ministry early in life, but his father had doubts about his suitability for so high a calling and so for two years he was a teacher. The call, however, would not be gainsayed and, after training at Hartley College, he served in the following circuits: Kettering, Laxey, Bradford II, Darlington, Halifax (Ebenezer), Harrogate, Middlesbrough, and Whitby. There were also three precious but costing years as a Toc H chaplain.

He retired in 1956 to Whitby and remained there for twelve years until the death of his first wife. In the course of time he married again and removed to Lytham, living first in Ansdell and then at Seafield House.

He excelled at ministering to the young, and each of his churches had a good company of young men. He was a preacher of great ability, both his message and his manner of delivering it inspiring confidence in his hearers. A life-long friend of Norman Nicholson, the Lakeland poet, he was himself essentially a poet, with a wide knowledge of poetry and a poet’s conception of life. Long before ecumenism was popular, he established good relations with other churches. He saw the possibilities of the press as an instrument of evangelism and wrote regularly for local papers and for the Methodist Recorder.

He published a number of books, including, as a keen cricket-lover, one on Hedley Verity. In retirement he continued to read widely, being always anxious to discuss with a visitor his latest theological ‘find’. Through letter-writing he continued to exercise a wide pastoral ministry. Most of all, he loved to preach. He frequently shared in the conduct of Holy Communion and was so engaged on Easter Day when taken ill. He seemed much better when, with the doctor’s approval, he went for a short holiday to the Isle of Man, but the day after his arrival he died suddenly but quietly at Laxey where, sixty years previously, he had ministered.

Samuel Davis commended his Lord not only in prepared sermons and addresses but by the warmth of his personality and the liveliness of his conversation, by his humour—he was a great leg-puller—and by the constant encouragement he gave to all, and especially to his brethren in the ministry, no matter to what age group they belonged. That he possessed to an overwhelming degree gifts and graces for the work of the ministry no one who knew him could doubt. He died on 28th June 1976 in the eighty-fourth year of his life and the sixty-first year of his ministry.

He married Lilian Johnston (1889-1968) in the summer of 1919 in the Bootle (Cumberland) Registration District.

I have not been able to identify the record of his second marriage.