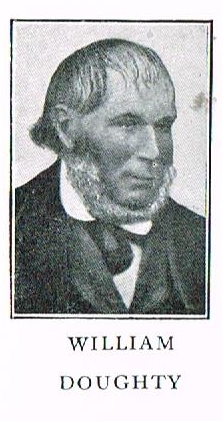 William Doughty was born at Leadenham, Lincolnshire in 1798.

At Oswestry, he was arrested while preaching at the Bailey Head and imprisoned at Liverpool, and in 1823. (Ref. “A Methodist Pageant” page 54/5 B. Aquila Barber).

When writing about those who pushed forward the boundaries of the Tunstall circuit in different directions, Kendall refers to “William Doughty, a Lincolnshire man and James Bonser, of Kinoulton, both of prison-fame, who did their part”. (Ref. “The Origins and History of the Primitive Methodist church” Vol 1 page 518).

According to Kendall, “Many requests for the establishment of services at places around Ellesmere, Wem, and even Oswestry were urged, and, from this 26th May, 1822, increasing headway was made in the district. One of the preachers “Put down to mission” was “William Doughty- who was appointed to break up new ground”. It was on his third visit to Oswestry that he was arrested and imprisoned; this actually furthered the cause considerably.

Kendall gives an account of what happened.” On June 8th, he took his stand at the Bailey Head, opposite the Red Lion, and because he saw neither the law nor reason why he should desist from preaching when Brynner, the constable, and his assistant told him to do so, they carried him off, and eventually put him in a grated cell under the council chamber. A good woman named Douglas brought him food, and though the place in which he was confined was, to use his own words, `too dark to write clear,`he did indite “a letter from prison” to his benefactor which after being revised by Mr Whitridge, the kindly Independent minister, was printed.”

According to Kendall, W.Doughty was shown great kindness by the Independents’ minister and people and acting on the advice of one of them, namely Mr Minshall, a solicitor – he refused to walk to Shrewsbury to serve his sentence of a month’s imprisonment, so a tax-cart was provided to carry him there. A crowd had gathered at Salop Road to see him off and he told them that in a month’s time they would see him coming back down the road singing a hymn. From this time Oswestry gained a footing in Oswestry. W. Doughty was not only granted a licence by the very magistrate, who had committed him to prison but it was granted with kind words.

W. Doughty sought the protection of a licence following the experience of Mr Whittaker of Knolton Bryn, who had been recently fined £20 by the magistrates of Overton for preaching in an unlicensed house.* A licence was an important document and W. Doughty was now able to preach without fear of persecution in Oswestry but it did not protect him elsewhere!

Indeed when he and T Mullock were at Tetchill they were charged by two men on horseback and W. Doughty was ridden over and his head was badly cut; so much so that blood poured through his hat. Fortunately the two men concerned were brought to justice through the actions of Mr Hughes of Ellesmere who took up the case.

Services in Oswestry were held in the house of Mrs Elliot, who, along with Elizabeth her daughter, stood by W. Doughty at the Bailey Head on the 8th June. Elizabeth had a sweet, well trained voice and helped with the singing. She is remembered with others, who did so very much to further the cause, although still in their teens. Doughty’s imprisonment affected her more than his sermon, Kendal tells us and she joined the church and became an excellent and powerful speaker.

For many years the name of Doughty was a household name in Oswestry.

The obituary of Frances refers to the jubilee of her husband’s imprisonment in Oswestry for open-air preaching being celebrated by special services.

The obituary for Frances tells us, “A life of consistent piety and unassuming usefulness was closed on earth when the spirit of sister Francis Doughty, of Oswestry, lately and suddenly took its flight. Without receiving any special signs of being summoned to the heavenly and unveiled presence of God, she ceased at once to work and live….She was endeavouring to take her tea when she began to change, and drawing her breath heavily, after a third breathing she leaned her head forward, and fell asleep in Jesus, February 10th 1874 aged 77 years”.

* “Early Recollections of Mr William Doughty, and of Primitive Methodism in Oswestry.” By Mr Thomas Minshall. 1863.

J Petty, The History of the Primitive Methodist Connexion, 1880, p190