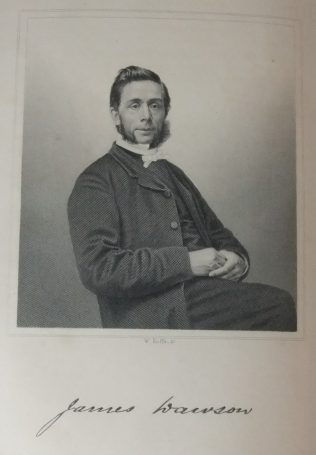 James was born on 20 December 1820 at Cox Lodge, Northumberland. He lived at Cox Lodge for seven years and attended a class meeting with a friend at a very young age. The family moved away and James lost his religious fervour until he was 13. He worked in Sunday School for a while.

James desire for knowledge took him on foot 9 miles each way to attend night school in Gateshead.

It was not until February 1842 that he felt truly at peace and sanctified following attendance at a fellowship meeting.

In 1844, James entered the ministry with the result of 10 years of prayer, study, work and spiritual experience and the fellowship of the church behind him.

His obituary records that he was a man of large and varied powers, of which some who knew him well bear eloquent testimony; but he was also a preacher of marked ability.

His sermons had nothing of the smart essay or learned disquisition about them; he was eminently a Methodist preacher, earnest, evangelical, soul saving.

A passion for self-improvement seems to have been born in him when he was born again; he was a prodigious reader.

James married Mary (b abt 1826) in about 1848. Census returns identify two children.