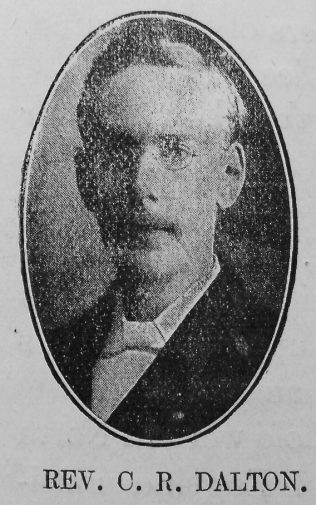 zoom
Primitive Methodist Magazine 1909 from an article about the choir at Greenbank PM Church, Darlington.

CHARLES RICHARD DALTON was born in the City of York in June, 1880. He had the good fortune to be born of godly parents, and matured in a Christian atmosphere. The name of Edwin Dalton, D.D.—his distinguished father—is a household word in Primitive Methodism, and few men, if any, have rendered such splendid help to our village churches by his ‘special services’ as he. He has been crowned with the highest honours our Connexion can confer upon him.

In 1902 Charles followed in his father’s steps and entered the ministry. He spent the whole of his probation in the Nottingham V. Circuit, under the competent superintendency of the Rev. Mark Knowlson, and the fruits of this period were evinced in subsequent years by his ability in organisation and thoroughness in detail. From Nottingham he passed to Darlington (three years), Goole (four years), Bingley (five years), and then came to Silsden last July. On all his circuits he did hard and conscientious work, and his services were much appreciated.

With young people he was immensely popular, had been President of the Skipton and Craven District C.E. Union, and at the time of his death held the office of Sunday School Secretary for the Bradford and Halifax District. He had a versatile mind, and a chaste vocabulary which particularly equipped him for the work of the ministry. His preaching was thoughtful, evangelical, forceful, and large congregations gathered to listen to him. He had high ideals of the ministry and constantly strove to realise them. His merry laugh, his sunny nature, and his sympathetic spirit made him a welcome visitor in the homes of the people. He was beloved of his brethren, loyal as a colleague, and highly esteemed by those who laboured in. close association with him.

During the few brief months of his ministry in the Silsden Circuit he won golden opinions. His winsome. personality endeared him to the hearts of the people. Throughout the West Riding of Yorkshire he was widely known and honoured. His life and work were full of promise, and we cherished great hopes, But God has thought otherwise. He was marked to fall, and ‘his sun went down while it was yet day.’ After a few days his illness assumed a serious nature, and on the morning of November 21st he passed to the higher service.

‘The passing hence’ of this young gifted preacher, capable administrator, and assiduous pastor is a great loss to our Church. The esteem in which he was held was evidenced by the large and representative congregation, including many ministers and distinguished district laymen who gathered for the funeral service at Farnhill chapel at the early hour of 8.45 a.m., when the Rev. W. Bilbrough, the deceased’s intimate friend, in a choice address paid a fine tribute to his worth and work. After the service the cortege left for the interment at Goole. He leaves a widow (daughter of Rev. M. Knowlson) and four children. To these, and all the sorrowing relatives, the deepest sympathy is extended.

Charles was born on 5 June 1880 at York, Yorkshire, to parents Edwin Dalton, a PM minister, and Mary Eliza Fox

Before entering the ministry Charles was an assistant in a physical laboratory (1901).

He married Ethel Palliser Knowlson (1881-1932) in the summer of 1906 at York. Census returns and birth records identify five children.