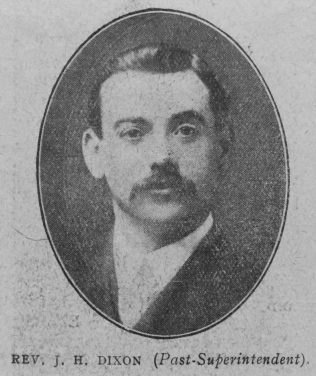 JOHN HARRIMAN DIXON: born at Distington, Cumberland, in 1877. In early life he was a joiner and cabinet-maker, and he never lost his love for the craft. His knowledge of building proved a valuable asset in the many restoration schemes which he undertook for his churches. Leaving Hartley College in 1904, he proceeded to render splendid service in Appleby, Richmond, Cwm, Nelson, Beverley, Driffield, Crowle, Scotter, Mablethorpe, Doncaster, and Cumberworth. He was a delightful colleague and was beloved in all his circuits. His keen sense of humour, genius for friendship, and sympathetic interest in people enabled him to exercise a fine pastoral ministry. He was an able administrator and a gifted evangelical preacher. His presentation of great biblical scenes and themes was masterly. Indeed, many of his sermons, salted with kindly humour, aptly illustrated by gleanings from wide reading and experience of the country life he loved, and delivered in his own inimitable style, were never forgotten by those privileged to hear them. On retiring to Appleby in 1944, he continued to preach until a serious illness brought his public ministry to a close. He was called home on 6 September 1958 at the age of eighty-one and in the fifty-fifth year of his ministry.

John was born in 1877 at Distington, Cumberland, to parents James and Rebecca. James was a colliery engineman.