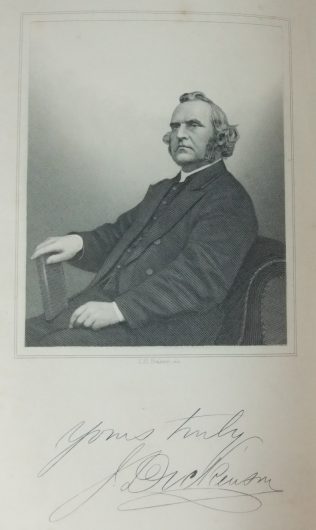 John attracted the attention of the vicar of Burton on Trent and was sent to school by the vicar. At the age of 14, John was apprenticed to a moulder. When he came out of his time, John was offered a partnership but his mind was firmly fixed on ministry.

At the age of 14, John was introduced to the Primitive Methodist Chapel and became a Sunday School Scholar. He was soon a teacher and then secretary of the Sunday School. It was here that he met his wife to be, they became engaged before he went into the ministry and they married after an engagement of 12 years.

John became a local preacher when he was 16.

John was Secretary of Conference in 1873 and President in 1876. He was Book Steward from 1875-1880 (full-time from 1878). On leaving the Book Room, John became Treasurer of the Superannuated Preachers, Widows and Orphans Fund. He sat on the Hymnal Committee in 1882.

His obituary records that John never shrank from applying discipline when fully convinced of the guilt of the party; and at Derby he did this at the peril of his own life. Alderman Johnson JP of Derby was told of a man, who was once an official of the Derby circuit, but who was expelled by John for immorality, who confessed on his deathbed that he had laid in wait for Mr Dickenson at the Canal Wharf between Draycott and Borrowash, with a loaded gun to shoot him, but John did not return that way as he had done before, though he had preached at Draycott that night.