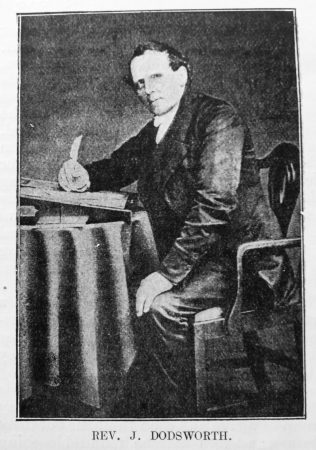 Jeremiah’s obituary – see attachment – records how he was converted through William Clowes about 1834 at Hull, Yorkshire. He soon became a local preacher.

Although his first station is recorded as Hull, in 1839 he was sent to London, a mission station of the Hull circuit, for his first appointment with Rev. Thomas Holliday. Here he suffered various forms of persecution including being brought before the city magistrates.

His obituary records:- “For a few years his ministerial career was one of extraordinary brilliancy, his services were in great demand; wherever he went he attracted crowded audiences, who listened with attention and delight to the rich evangelical truths which flowed in streams of graceful eloquence from his lips. His sermons were clear in their conception, logical in their arrangement, rich in divine unction, practical in their tendency and abounding in great principles. They were clear and conclusive in their argumentation, and full of Christ. His preaching was most energetic, and having a clear, sweet, pathetic, and tremulous voice, the minds and passions of his congregations were under his control, and at times the effects produced were thrilling and astonishing.”

The better land; or, the Christian emigrant’s guide to heaven.1853

The Eden family; showing the loss of our paradise home…1861