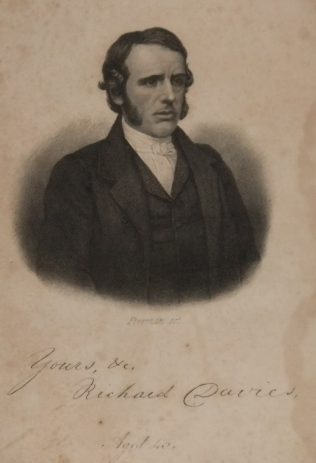 Richard was born on 24 July 1804 at Worthen, Shropshire, to parents Edward and Elizabeth. He was baptised on 5 August 1804. At the age of 8, Richard was set to work in the lead mines at Minsterley, Shropshire. He received some education by attending a Sunday school taught by Independents and Baptists.

Richard first heard the preaching of the Primitive Methodists whilst visiting Shrewsbury in 1822. He and some others invited the PM Missionaries to visit Minsterley. Richard was converted and joined with the new PM society at Minsterley.

Richard was put on the Plan by the December 1823 Quarterley meeting without his consent and given several appointments. Feeling his inability for this position, he was strongley tempted to rebel against it; but as the time drew near, a dread of neglecting it came upon him and he resolved to go and do his best. His first appointment was in a village some seven miles away from home. He and a younger companion travelled together to the house where the service was to take place. They arrived very early whilst the lady of the house was still putting out benches. Not being recognised, she thought them just boys and sent them away until service time. Richard and his companion used the time to pray about the service and when it took place a good time was had.

In December 1824, Richard was pressed to enter the ministry, but after much prayer he declined. He was further approached in March 1825 and accepted.

Richard was sent as a missionary to the Brinkworth area of Wiltshire in 1825. At that time, Petty records that the parish clergyman was also a magistrate, but he was not a minister of evangelical sentiments. This meant that the zealous missionaries did not receive much, if any, protection from the law in their labours.

When first married, Richard was appointed to Frome. He was paid 14s a week and had a small and poorly furnished house. That was then the highest allowance for a married minister without a family. Richard’s obituary sadly records that Richard buried his first born child (not shown below) in the time he was at Frome.

Petty also records that Richard was successful in expanding the work at Motcombe in the period 1833/34 when he was liberated from being superintendent to carry out missionary activities.

Whilst at Motcombe, Richard received a visit from Hugh Bourne, who spoke to him about the leasing difficulties being experienced by Wrockwardinewood Chapel. By a special request to the District Meeting, Richard moved to Wrockwardinewood to sort out the property issues. Within four years the property had been made freehold.

Richard appears to have had a talent for sorting out difficult property issues for in 1838, through the influence of James Bourne, Richard went to Bolton to assist in getting the Little Bolton and Great Bolton property out of difficulties.

Richard became Connexional Book Steward during the period 1859-1865, being appointed after the sudden death of John Day. In 1865 chronic bronchitis restricted his activities and in 1867 he retired to York where he became the first Secretary of the PM Insurance Company.

James Garner writes; ‘His abilities as a public speaker and teacher of religion was always acceptable, instructive and edifying. He was not what may be termed an oratorical speaker, neither did he display much profound erudition or high literary attainments; but his oral addresses, both in the pulpit and on the platform, were chaste, concise, instructive and convincing without any attempt at rhetorical flourish or embellishment of style.