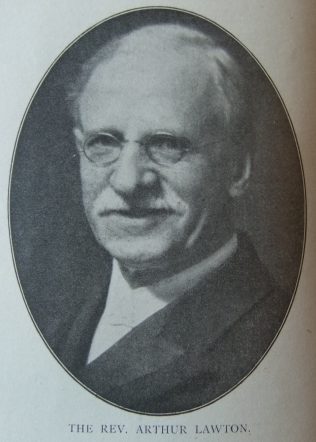 Arthur was born in 1868 at Altrincham, Cheshire, to parents Samuel and Mary. Samuel was a carter (1871) and later a general labourer.

After an all to brief school attendance, Arthur began work at the age of twelve. The 1891 census describes him as a pork butcher.

The bent to self-improvement was evidenced in the use of the little spare time for study and musical attainments. He became a teacher in the Sunday School at the Oxford Road Church, Altrincham and his abilities being recognised, he became organist and choirmaster. He progressed to become a local preacher and during the winter of 1893/4 Arthur was employed as a special agent on his home circuit.

Following acceptance as a ministerial candidate, the 1894 Conference offered a station in New Zealand, but circumstances prevented the acceptance. In September 1894, Arthur was employed as a hired local preacher by the Canning Town circuit and was appointed to Canning Town as a probationer by the 1895 Conference.

Arthur spent his whole ministry in three adjoining circuits within a five-mile radius.

At Forest Gate, during twelve years, membership increased from one hundred and sixteen to two hundred and ten. Chapel debt was reduced from £1,500 to £300 and a new mission hall was erected.

The 1924 sketch in the PM Magazine reports that by 1924 at Leytonstone the debt on the property of £1,975 had been cleared and membership increased from seventy-four to one hundred and twenty-one.

Arthur served as a member of the West Ham Board of Guardians for sixteen years, and was Chairman of the Board in 1919-20. He also served as a manager under West Ham Education Committee from 1910.

After superannuation, Arthur assumed pastoral oversight of the Sixth Avenue Church in the Leytonstone and Forest gate circuit. His obituary records that he was a believer in evangelical preaching, keeping abreast of modern thought.

Arthur died on 25 May 1945 at Whipps Cross Hospital, Leyton, Essex.