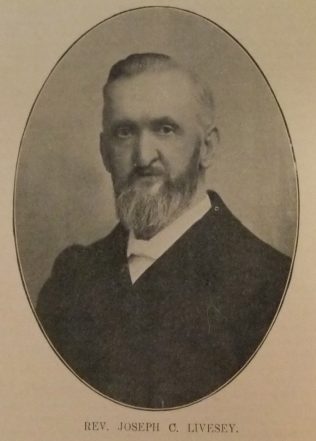 Joseph was born on 20 May 1849 at Sowerby Bridge to parents George and Elizabeth. George worked as a millwright and later as a steam engine fitter. His parents were enthusiastic Primitive Methodists, who took part in the government and work of the Sowerby Bridge Circuit. His father was a local preacher ands society steward and his mother a class leader for thirty years.

Joseph chose to accept and serve Jesus Christ at the age of ten. He became an active worker in the Sunday School, Temperance and other departments of church life.

Joseph filled the offices of Temperance, Sunday School, Building and District Committee Secretary at various times throughout his ministry.

As a preacher he was practical rather than rhetorical, and aspired simply to be a painstaking, plodding, conscientious circuit minister.

His obituary records that as a man he was manly, upright, straightforward, fearless and frank. As a friend he was true, reliable and absolutely trustworthy. As a minister he was devoted, active, earnest, unsparing and enthusiastic.