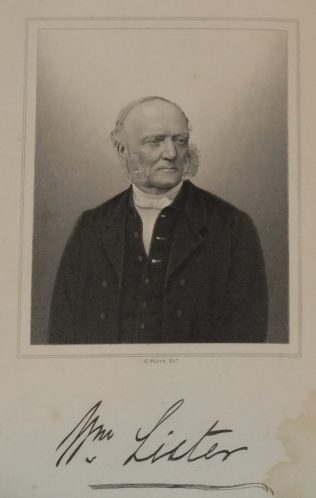 William was born on 28 December 1804 at Washington, Co Durham to parents Thomas Lister and Margaret Wiggam. He was baptised on 10 February 1805 at Washington. His parents were members of the established church.

When William was six, the family united with a Wesleyan society. At the age of 14, William’s family moved to Bigge’s Main near Wallsend, Northumberland.

Through the preaching of Thomas Nelson, William’s father took charge of a new PM Society formed in the neighbourhood circa 1822. William had his conversion experience in April 1823 and for the next two years gave himself to prayer and study.

In June 1825, the North Shields Quarterly meeting decided to place William on the plan as an exhorter – it was a surprise to him as no-one had spoken to him about it, neither had he sought it. However he felt a calling to the work and took part in his first service at Howden on 26 June 1825.

William worked as a local preacher for two years.

Aged 20, William received an urgent call from the Sunderland circuit to enter the ministry. Initially he accepted but on the journey to take up his appointment he felt a sense of being unfit and returned home. He then experienced a sense of shame, of condemnation and a deep humiliation before God and vowed if another call came he would accept it. Three weeks later his own circuit, North Shields, called him to ministry.

William was particularly associated with developing the work in Berwick circa 1830, as a missionary from North Shields. When he returned in 1832 he found that he had to almost rebuild from scratch.

His obituary records that as a preacher he was plain, forcible and effective. The burden of his ministry was salvation by Jesus Christ and the privileges of them that believe.

As a pastor he was diligent and painstaking, regularly visiting the members of his flock. And in times of distress and sorrows, and bereavement among his people, he was ever at hand with a ministry of kindly sympathy.

William was president of Conference in 1868.

William was Book Steward during the period 1865-70. He became a Deed Poll member of Conference in 1871. In later years he was Treasurer of the Superannuated Ministers Fund.

William died on22 January 1880 at Southwark, London. He was buried at Brockley Cemetry in South-east London beside his wife and a daughter.