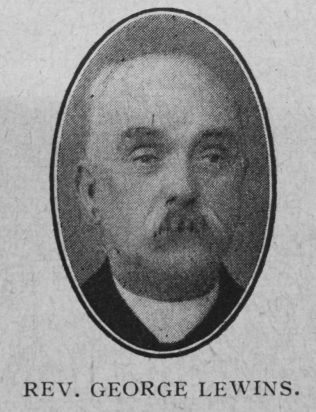 Transcription of obituary published in the Primitive Methodist Magazine by J.S. White

My friend, the late Rev. George Lewins, was a child of the Borders, that land of religion and romance, as well as of warfare in the days of yore. He was born in a small village on the banks of the Tweed some eighty years ago, and was one of a family of eight. His parents were connected with the Auld Kirk of Scotland, and, as in the “The Cotters’ Saturday Night,” when

“The cheerfy’ supper done, wi’ serious face,
They, round the ingle form a circle wide;
The sire turns o’er, with patriarchal grace,
The big ha’ Bible, once his father’s pride;

And ‘Let us worship God!’
he says with solemn air,
Then kneeling down to
Heaven’s Eternal King,
The saint, the father, and
the husband prays.”

Some sixty years ago the Berwick -on-Tweed Station was all aflame with holy evangelism, and hundreds of people were converted. George Lewins was amongst the number and such was the joy he experienced that he began almost immediately to preach. He commenced to hold dinner-hour meetings among his fellow workmen, and these were continued for nearly two years, when he entered our ministry. Some young men brought to Christ in this way distinguished themselves later in life. Two became ministers and another developed into the brilliant journalist and author, known as Mr. W.M. Patterson and who became Vice-President of the Conference a few years ago.

In 1863 Mr. Lewins was called into the ministry by the Whitby Circuit, and there came into intimate fellowship with the Revs. H. Moore and William Graham, both of whom, like himself, have since gone to enrich the company of the saints above. From Whitby he removed to North Shields, then under the supervision of Rev. C.C. McKechnie. That large-souled man at once clasped young Lewins to his heart, and became a second father to him. Mr. McKechnie stimulated his colleague’s literary gifts and kept him on his staff of contributors during the whole of the thirteen years of his editorship of our Connexional periodicals. In and around North Shields Mr. Lewins spent some of the best and happiest years of his life.

Later, at Greenock, in Scotland, he had as his colleague the Rev. James’ Lockhart, now Principal of Hartley College, Manchester. Trade at the time became terribly depressed, and our Church was heavily embarrassed. To their great honour, the several Presbyterian churches in the town came to the rescue of our people: and raised several hundred pounds.. From Greenock Mr. Lewins removed to Barrow-in-Furness, where he spent five of the most strenuous years of his life. Here he became a member of the School Board and Chairman of the Science and Art Committee. Subsequently he spent a second successful term in the West Auckland Station in company with the Venerable Rev. John Snaith, now residing in Canada with one of his sons. During this period, the two brethren had the joy of seeing one hundred persons added to the Church.

Mr. Lewins retained his love of evangelistic work, and in the north of England conducted several successful missions in different localities. After forty years of toil he had a bad breakdown, but in spite of enfeebled energies he bravely continued to labour for several years until at last he retired from the ministry and spent the last nine years of his life in Liverpool.

George was born abt1842 at East Ord, Berwick upon Tweed, Northumberland, to parents George, a labourer (1841), and Jane.

Before entering the ministry, George worked as an oil manufacturer (1861).