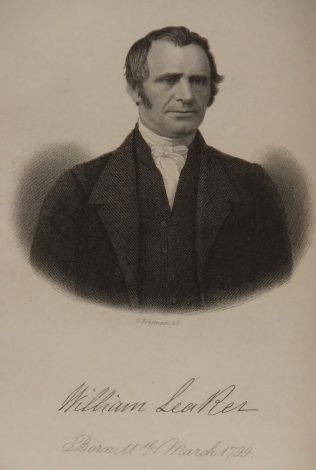 William was born on 11 March 1799 at Fremlington, Devon. His father was a farmer and attender of both Anglican and Wesleyan services. His mother was Wesleyan. Upon conversion, William joined the Wesleyans and went on the plan in 1817. In 1824 he was persuuaded to go the America. On the ship he held several services for the captain, crew and passengers. The ship got caught in a storm and foundered on Traceday Island in the St Lawrence. All were saved by the St Lawrence pilot. William could not settle and returned home in December 1824 and preached on the Barnstaple Plan. In 1828, William heard Primitive Methodist preachers in the Motcombe circuit. He joined the PM society and soon became a class leader and local preacher.

Kendall writes; ‘ It has been the good fortune of Doncaster to be chosen by several veteran ministers as the place wherein to spend the quiet evening of life. William Leaker, who died September 26th, 1878, was one of these. Two years of his ministry 1837-8 were spent in the Doncaster Branch, during which he married the daughter of George and Martha Herring, of Warmsworth, whose cottage from a very early date was the preaching-place and the home of the servants of God. His declining days were spent in “visiting the aged, the suffering, the poor, and giving comfort to the sorrowful.” He may well be remembered here; for, when the Balby Road Chapel could not pay its way and the trustees and superintendent were greatly concerned, Mr. Leaker came to their help. His gifts, amounting to £400, meant self-denial for him but salvation for the cause. The last one was so opportune and so unostentatiously and graciously bestowed as to enhance its value, and the Conference of 1872 quite properly acknowledged it by a special resolution.’

His obituary records; ‘He was a man of strong faith in God and recalls several instances of immediate answers to prayer.’

The Life and Labours of the Rev. William Leaker: Who for Twenty-six Years was an Itinerant Preacher in the Primitive Methodist Connexion , 1880