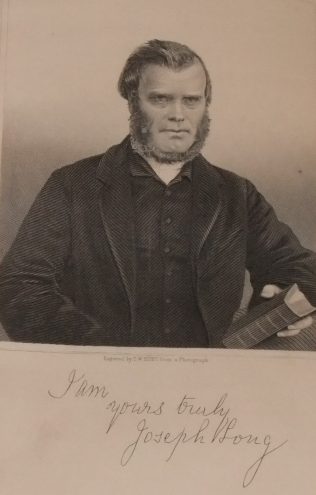 In 1843, the leaders of the Bottesford circuit near Nottingham suggested the money for an Australian mission could be raised by asking the 70,000 children in Primitive Methodist Sunday-schools to give or collect one penny a year. This children’s crusade was successful, and in June 1844 two ministers, Joseph Long and John Wilson, were appointed to South Australia. Joseph was the first PM Minister to be stationed in Adelaide.

In 1850, Mr Ward removed to Auckland, and was succeeded by the Rev Joseph Long, who won golden opinions from all classes by his affability. Shortly after this minister’s arrival the Bell district was opened, and he, with his local preachers held service there in the rush built houses of the settlers till Sept. 22nd, 1855, when the present chapel was opened. Through Mr Long’s exertions a chapel was built at Hurdon, on the Franklyn Road, and preaching services instituted at Mangorei and Tataraimaka. Having fulfilled his term, Mr Long removed to Auckland on the 24th of January, 1859, and was succeeded by Mr Ward, who returned to the settlement on the 31st of the same month.

Joseph was President of the New Zealand Conference in 1882. He died on 24 February 1893 in Auckland, New Zealand.

His obituary records he was a good paster. His preaching was practical and was accompanied with much unction and power. The strength of his ministry was his deep sympathy and friendliness.

(Taranaki is a region in the west of New Zealand’s North Island and is the 10th largest region of New Zealand by population. It is named for the region’s main geographical feature, Mount Taranaki and contains the town of New Plymouth.)