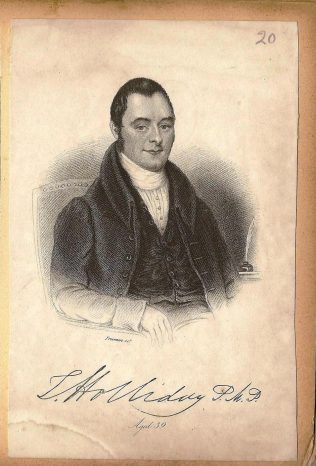 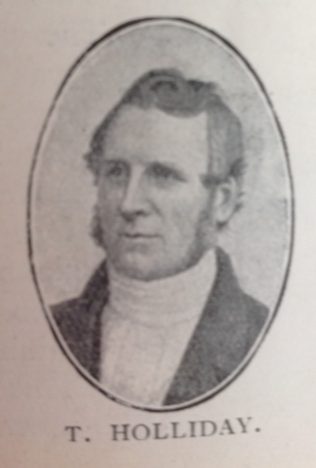 Thomas was born on 5 September 1797, in a row of farm cottages called Labour-in-Vain, in Rufford, Nottinghamshire. It was in the parish of Bilsthorpe, where he was baptised in the parish church.

His father John was a shepherd, employed by the Vessey family, first of all on their estate at Labour-in-Vain, and later at Aughton, near Rotherham in Yorkshire, where the family moved when Thomas was a boy. His mother Mary died when he was young, but he had four brothers and four sisters, including Hannah (1789), Mary (1791), John (1795), Lister (1799) and Joseph (1802).

In 1819, Jeremiah Gilbert, a Primitive Methodist itinerant preacher, set out on a mission to the Sheffield area.  One day, after preaching in the village of Aughton, he was invited by John Holliday to have supper in their house. Talking around the table, Gilbert asked 22 year old Thomas about the state of his soul. Afterwards they prayed together for three hours, and Thomas Holliday became the first person to be converted in Aughton. His happiness however soon turned to dismay, for as he endearingly put it, ‘I was like a speckled bird amongst them’, and he lost his job.  As a Primitive Methodist he was seen as a trouble maker, and no one would employ him for a while.  In the meantime, while living on his meagre savings, he was chosen to lead a class meeting, and discovered a gift for preaching.

This must have been a worrying time. On 23 February 1820, either shortly before, or shortly after Jeremiah Gilbert’s visit, Thomas married 16 year old Mary Ann Hind. Mary Ann shared his faith, because he noted that at a special meeting in Sheffield on 26 March 1821 ‘my wife got sanctified’.  This meeting was to change their lives. It was decided to send missionaries to the Barnsley circuit, and Thomas Holliday was chosen to go.  This was the start of 37 years travelling as an itinerant preacher, or Primitive Minister minister.  Mary Ann was pregnant with their first child, but immediately Thomas ‘broke up my house and sold the greatest part of my goods … and we felt the Lord with us.’ What Mary Ann felt about this is not recorded, but just 12 days later they arrived in Norton, a journey of about 46 miles from friends and family.

Thomas set about his missionary duties with enthusiasm, preaching in the open air and visiting the sick. At the end of May 1821, while preaching in the Butter Market at Halifax, Thomas was arrested, and imprisoned in Wakefield House of Correction. Five days later they were bailed so that they could preach at a Camp Meeting on Mexborough Common. When they appeared before the magistrates at at Bradford Quarter Sessions, they were acquitted, and Thomas Holliday immediately preached in the streets.

Their first child, John was born in August 1821, but it was not long before they were on the move again. In January 1822, they left Norton to move to a different area within the Barnsley Circuit, which covered a very wide area.  By the time their daughter Ann was born in 1823, they were living in Honley, about 15 miles from Barnsley.

An incident that happened here, highlights Thomas Holliday’s way of never missing an opportunity for ‘conversation preaching’. As Thomas Holliday was crossing Honley Moor, he met Squire Brooke out shooting. ‘Master, you are seeking happiness where it will never be found.’  Squire Brooke never forgot those words, which after he became a preacher himself he recounted as the means of his conversion. (1)

As an itinerant preacher, the family was frequently on the move, not always without incident.  In July 1828, Thomas and Mary Ann, with their young family, undertook the move from Manchester to Bradford by coach, when a terrible accident occurred. A passenger fell from the coach and suffered fatal injuries. As Thomas noted in his Journal, ‘Our journey to-day from Manchester, was in several respects unpleasant and painful.’ In Bradford a second son, Thomas, was born, and baptised in the Primitive Methodist Chapel by William Clowes, one of the co-founders of Primitive Methodism. Two years later a third son was born in Hull, named William Clowes Holliday, and baptised by the great man himself at Mill Street Primitive Methodist Chapel in Hull on 30 September 1831.

In 1843, Thomas Holliday was appointed Book Steward, for the first two years as Assistant to John Hallam. This was an important national post, which meant a move to London, where the family took up residence in Sutton Street, the headquarters of the Primitive Methodist Connexion. His first action was to revolutionise the system of keeping accounts, which had led Hallam into difficulty.  He was also Treasurer of the General Missionary Committee. Thomas Holliday served as Book Steward until 1854. He served the remainder of his ministry in London, and died in 1858, at the age of 60.

You can read more about his life and ministry from 1821-29 in these extracts from his Journal, which have been transcribed from the Primitive Methodist Magazine (attached below).