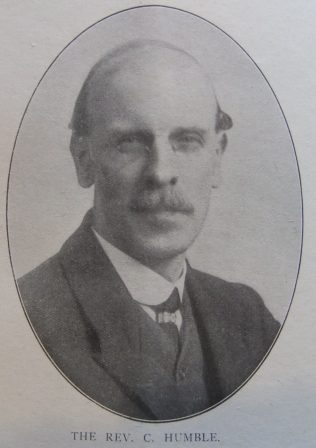 Charles spent a year as a hired local preacher at Barrow before beginning his probation at Birkenhead.

Charles was one of the pioneers of the Christian Endeavour movement. He served as Connexional C.E. Secretary from 1910-1915. He was a member of the National C.E. Council for over fifteen years.

He was also well known as the C.E. Tours Secretary serving terms either side of being Connexional C.E. Secretary.

Charles was active in the League of Nations movement after WW1.

After retirement in 1935, Charles worked as an active supernumerary in the Amble circuit.

His obituary records that Charles was an earnest and persuasive preacher, excelling as a soul winner. He laboured for revivals and witnessed them, notably at Hartlepool, Tow Law and Amble.

Charles died on 25 April 1937 at Waterloo, Lancashire, at the home of his daughter. He was laid to rest at Burtreeford in a little cemetery immediately behind his early home.